In typical Microsoft fashion, they don't catch a new trend right with the first iteration but they keep at it and eventually strike the right tone and in more cases than not, get good enough. And often good enough wins. That seems the be the pattern playing out with Windows Azure, its cloud platform.

Windows Azure debuted as an ahead-of-its-time foundational Platform as a Service (PaaS) for its core installed base of .Net developers but has since expanded and extended its appeal. Unlike application-centric PaaS offerings that really are extensions of a single SaaS application, ala Salesforce's Force.com, Windows Azure is meant as a general purpose platform and has grown more general and applicable since its initial release. Last year it grew from .Net to other languages that ran atop Windows and its ASP server including Java, Javascript, PHP, Python, Ruby and other common web languages.  It added APIs and integrations for Visual Studio, Eclipse and popular scripting languages. But you needed a Windows machine to deploy and the target was a Windows server or middleware service. With its June release, Microsoft has finally joined the mainstream by adding a full Infrastructure as a Service (IaaS) offering that lets you deploy just about anything. The new IaaS service is clearly designed with at least surface knowledge of the market leaders, Amazon Web Services, Rackspace and others, and leverages a much more mature Hyper-V as the virtualization layer. Both Windows and Linux are supported (all but RedHat it seems) as the guest OS and you can deploy directly from a Mac or Linux machine.

The service appears to be based on the forthcoming Windows Server 2012 as it offers up the impressive virtual networking services from that OS which let you set up VPNs back to your data center, Virtual Private Clouds (VPC) and other network constructs that create secure non-public perimeters, and let you fluidly move IPs with the VMs and PaaS-based applications you deploy.

On the Big Data front, Microsoft initially offered its own alternative to Hadoop, but has now relented to the market and is offering Hadoop services directly.

Its unique PaaS capabilties continue, of course, which makes Windows Azure one of the most empowering cloud platforms for enterprise organizations on the market today. Its Azure Media Services are a strong differentiator for anyone wanting to distribute video content. In this release they have added simple web site deployments, a nice app store offering pre-configured applications and GitHub integration with one-click deployment from any of these options. Plus with the new release of System Center and the forthcoming release of Windows Server 2012, they finally have strong compatibility between on-premise and cloud so that hybrid deployments can be set up very easily.

Since 2008, Forrester has talked about how cloud services, through their ability to abstract infrastructure, software and hardware have empowered different classes of users and developers. SaaS abstracts all the way to the application so that non-technical users can consume and lightly modify the service. PaaS services, by abstracting away the virtualized infrastructure, empower developers who's skills are focused around the design of applications, not their configuration and the maintenance of the resources below it. The appeal of IaaS lies only with the most sophisticated developers who must have the skills and experience to properly configure, manage and maintain all the layers – and there are far fewer of these developers than anyone else (See Figure 1 below). 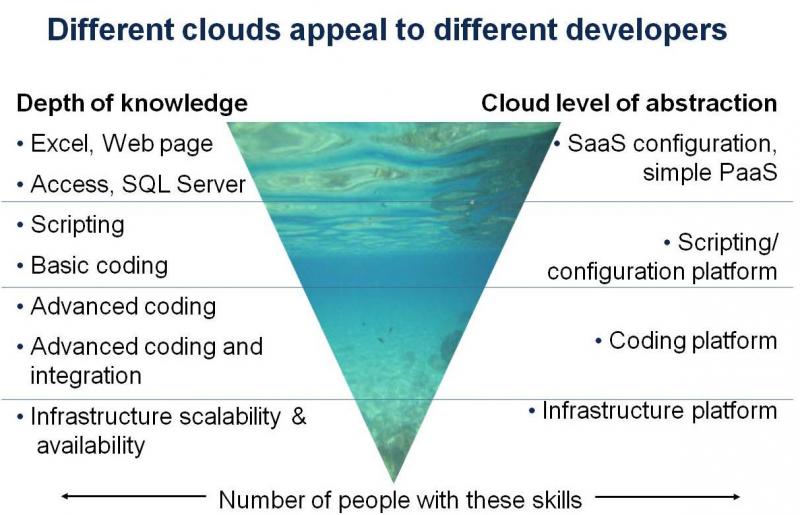 This stratification of customers has led the leaders in the market to develop bridges between each layer to broaden their appeal. AWS has been rapidly adding services that pre-configure and manage common stacks and applications. It's Simple Queuing Service was one of its first moves. It now has a whole series of plug-and-play development services for notification, mail, caching, databases, content delivery, MapReduce and many more. It also offers Elastic Beanstalk and CloudFormation for simple deployment of complex workloads. None of these rise to the level of PaaS which provides abstraction of a full middleware layer but to fill this role, AWS has its ecosystem of partners such as Tibco, Engine Yard, Heroku and others who deliver their PaaS atop AWS' base IaaS service.

Only Microsoft, as of today, offers the broadest IaaS and PaaS from a single vendor cloud platform. The company has also taken steps to make the consumption of Windows Azure as simple as possible for its installed base of developers. You can deploy from Visual Studio and automatically monitor and start managing your apps from System Center. You can deploy from Team Foundation Server directly and incorporate Windows Azure into your application lifecycle management process. And its core server-based applications, Sharepoint and SQL Server can be deployed to the platform directly (yes, you can put SQL Server in a VM rather than use SQL Azure if you prefer).

Microsoft is still in the process of getting all its hosted and SaaS applications onto Azure – Office 365 does not run on its cloud platform yet, for example. But this integration is in process, according to the company.  And it has a big task before it to get the thousands of Windows applications built by its partners moved over to Windows Azure. This last one is probably their biggest outstanding task, as the ecosystem of partners offering SaaS, PaaS, management tools and cloud services on AWS is a huge reason for its outsized success.

Should you adopt Windows Azure? Well, if you were holding back before because you felt PaaS presented too much lock-in, that excuse is now gone. If being Windows-only was a roadblock, that's gone too. Don't let Hyper-V be your excuse; you're probably running it somewhere in your enterprise today; and has Xen or KVM been a legitimate roadblock to your public cloud adoption so far?Pricing and SLAs on Windows Azure are close to those of the leading players too (they lack a Reserved Instances answer to AWS but can't be far from matching it that too).

Whether you are starting your cloud journey with simple web sites, common applications pulled from GitHub, building new code at the PaaS layer or migrating capabilities from the enterprise to cloud-based VMs, you can take that path to Windows Azure today.

Concerned about getting too dependent on Microsoft? Well you could get it all from Oracle instead.

Biswajeet Mahapatra February 1, 2023
Indian enterprises have had software as a service (SaaS) on their radar for the last seven-plus years, if not more. SaaS uptake in India was slow, and cost used to be the only major driver toward SaaS adoption. Indian enterprises were in dilemma when major software vendors shelved their on-premises solutions in favor of SaaS-only […]
Read More
Blog

Diego Lo Giudice January 27, 2023
The missing piece in digital thinking today is low-code. Learn how low-code platforms and agile values, principles, and practices all fuel each other.
Read More