Forrester has just completed a comprehensive analysis of data center networking solutions from Alcatel-Lucent, Arista Networks, Avaya, Brocade Communication Systems, Cisco Systems, Extreme Networks, Hewlett-Packard, and Juniper Networks. Instead of comparing just the vendors’ features and functions and positioning them accordingly, we took an outside-in approach. We stepped into the customer’s shoes and crafted 85 questions based on the needs of a composite company. This composite is representative of the kind of companies we talk to every day. In fact, this customer perspective came from Forrester’s customer inquiry calls, network assessments, and large-scale business surveys.

Forrester created an RFP based on an infrastructure and operations (I&O) organization that’s: 1) facing decreasing IT budget; 2) wanting to evolve their operations team from technology silos into a service organization; and 3) looking to transform their data centers from a consolidated infrastructure to a private cloud. They need a system that reconfigures elements on the fly and monitors the output to ensure that the newly created services adhere to business policies and rules — a concept we call virtual network infrastructure (VNI). Forrester defined VNI in 2011 as the ability to accomplish five tasks:

This composite company requires the system to: 1) scale while building out their three data centers; 2) reduce the amount of manual setup and operations; 3) help to standardize processes and procedures; 4) share the infrastructure for workloads; and 5) increase the trust levels. We’ve outlined these requirements separately and refer them to as the five S’s. 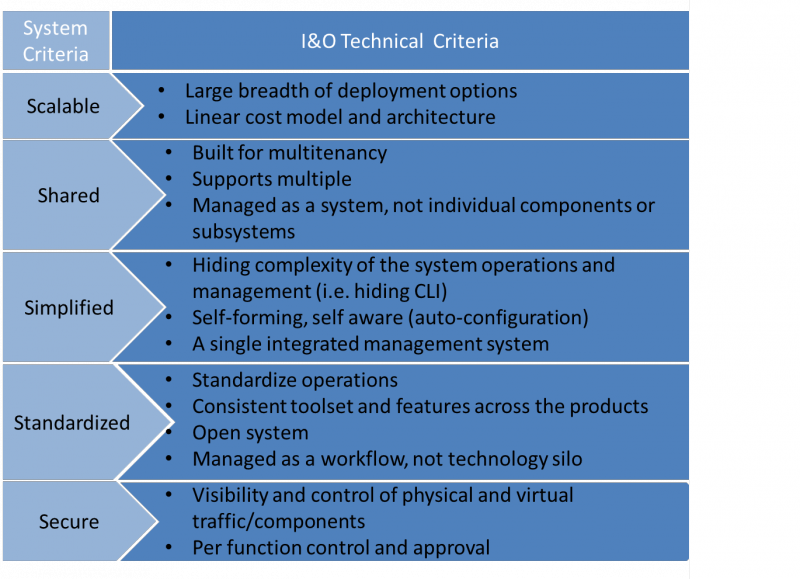 Thus, no company took a leadership position in our data center networking Forrester Wave™. However, Cisco and HP lead the Strong Performers category. Each of the Strong Performers provided capabilities in two or more of the five S’s. Cisco and HP separated themselves from the pack with a complete road map and vision toward delivering VNI functionality. For example, not only does Cisco offer the largest breadth of hardware products and features, but its offerings also allow I&O professionals to start thinking about enabling hybrid clouds. HP takes a different approach and focuses on driving simplicity into operations, synchronizing virtual and physical networks, and integrating networking into the orchestration layer. Only because of a late start, Alcatel-Lucent, Extreme Networks, and Juniper are rapidly building out their data center portfolios. Each vendor has a smaller set of options because they entered the game much later than Cisco. The Contenders — Arista, Avaya, and Brocade — all have strong products for aspects of the data center but didn’t address the full requirements of the Forrester Wave’s composite organization.

This doesn’t mean that one of the vendors won’t be best suited for your area. The Forrester Wave is a living document that can be altered to fit your goals. By adjusting weights of the criteria, I&O professionals can see a different set of results that will rank vendors according to their own business technology strategy.

The Hyperscaler/GSI Relationship Has Forever Changed — Here’s How

Bill Martorelli June 16, 2022
By virtue of ever-increasing spending by enterprise customers, the cloud hyperscalers have been elevated to strategic partners of the first rank. This has forced many changes for enterprises and their global systems integrator (GSI) partners. Hyperscalers not only have earned a seat at the table but have gained significant influence on the behavior of their […]
Read More
Blog

Naveen Chhabra June 13, 2022
Elucidate Subscription-Based Hardware Offerings Public cloud innovations influence your technology decisions in many ways. Cloud pricing is shaping the pricing for on-premises data center infrastructure. I receive many client calls around evolving subscription-based hardware, and those discussions reveal their confusions. As you aim to make an optimal decision for your business, let’s develop an understanding […]
Read More