Skip to content
< Blogs
Home > Featured Blogs > ITSM And The itSMF In Norway – Different In So Many Ways?

I’d not been to Norway for 32 years (I’m now embarrassed to say), so I really didn’t know what to expect as I travelled to the annual itSMF Norway conference in Oslo last week. I certainly didn’t expect the high price of just about everything; and I wondered if I would get a true picture of Norway in an airport hotel (in Oslo) with over 600 IT and IT service management (ITSM) professionals.

Now this is where my blogging could get me into trouble (or even more trouble), as I make a few personal observations as well as ITSM observations. But please humor me – they are all said in a very positive manner as I wonder what I missed in the Norwegian-language sessions and what those outside of Norway miss everyday. I’ll also write a second blog to cover some of the valuable content as soon as I make time.

Firstly – “Wow, over 600 attendees for a country the size of Norway.” According to Wikipedia, Norway has five million citizens. You can do the math (or, as I would say, “maths”) relative to other countries. We have 63 million citizens in the UK …

Secondly the rigor of the presentation selection and review process was very thorough. Hopefully what started out as good ideas and concepts had a higher chance of delivering rich content to the attendees because of it. Personally, I really enjoyed the English-language presentations but felt gutted that I couldn’t benefit from those in Norwegian (of course my fault entirely). I wonder if we could increase foreign attendance at non-English-speaking international conferences whether we justify a translation service for those of us not gifted outside of our native tongue? I’m certain we would learn so much looking across geographical lines and cultural norms – something I’m still not certain happens enough with the status quo.

… In that people can read the wrong things into my words.

My initial observations, once I had recovered from the cost of the bus from the airport to the airport hotel, were perhaps pretty shallow on my part but I did wonder how it would influence the conference and, from a bigger-picture perspective, IT service delivery in Norway. I have also limited my words below in an attempt to limit potential damage as I enter the non-techy world of lifestyle and culture (“stop digging” springs to mind):

I tweeted about the high proportion of ladies relative to gentlemen at the event. Maybe itSMF Norway could pass on a full breakdown; but in the smaller, pre-conference CIO-type session I presented to it was 80% ladies. For the event itself I would guess it was circa 30% ladies but I could be wrong. For those of you that think I am wrong to point this out I agree with you in some ways – I shouldn’t have to make such statements. I bet others are bothered by the fact I used “ladies and gentlemen” rather than “men and women” but I suggest that says more about you than it does me. It’s the language I use.

Stuart Rance observed as a similar “touchy-feely” point (and apologies Stuart if I have just dropped you in it at HP) – that looking around the conference it didn’t look like “an IT conference.” He was right; it could have been an HR or Marketing conference based on visuals. OK, maybe there wasn’t enough slicked-back hair or cufflinks for the latter.

The hash tag was also interesting – #itsmf2013, i.e. no mention of location. Maybe this reflects something about the Norwegian mindset or maybe I have turned into the Sherlock Holmes of ITSM?

The wealth of learning …

My learning actually started on the way to the conference. Wouldn’t the IT customer satisfaction process be improved by the simplicity of something like this: 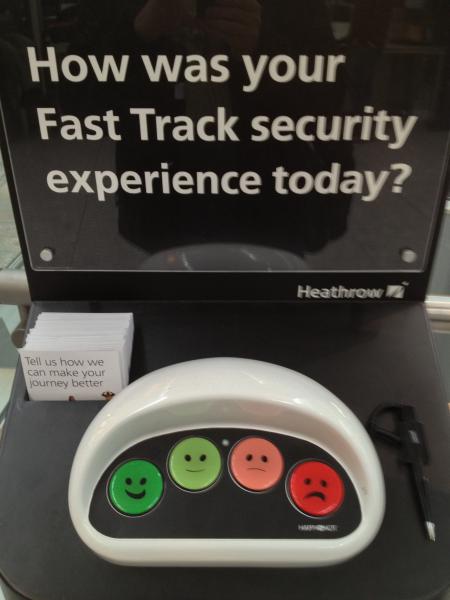 It reminded me of the happy face/sad face approach that Malcolm Fry and Patrick Bolger of Hornbill have previously talked about: http://blogs.forrester.com/stephen_mann/11-10-14-it_service_management_metrics_advice_and_10_top_tips

More of my learning will follow. There was enough good content just in the English-language sessions to write at least another blog.

My final thoughts (for now) …

The event left me with a number of questions outside of the content:

So there you have it – Norway Part 1. What do you think?