The recent Forrester SaaS for IT Service Management (ITSM) Market Overview has proved popular but I thought it wise to step back from its focus on SaaS for a moment to talk about “choice.” That is choice of delivery model for ITSM-enabling capabilities; both upfront and over time. You might argue that this is flexibility rather than choice; but to me it is choice – on-premises, SaaS, or maybe both. If you look at the figure below it’s not necessarily a question at the forefront of people’s minds when choosing a new tool, ITSM-enabling or otherwise: 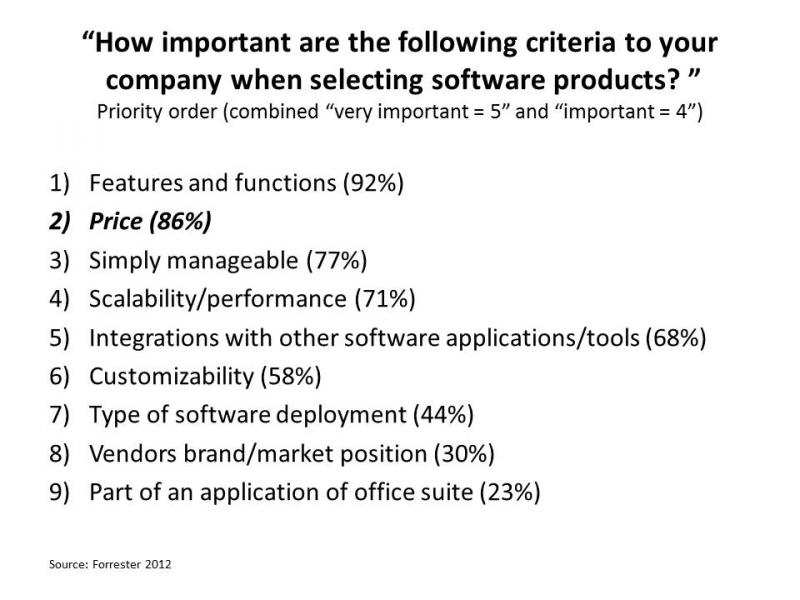 While Price nestles snuggly behind Features and functions, the closest to choice is “Type of software deployment” sitting in seventh place at 44%. It’s good to see that what the tool does is far more important than the delivery model, it’s probably also indicative of the fact that on-premises as a delivery model is not going away.

IMO choice is important; in particular choice between delivery models and also choice over time. It’s also becoming an increasingly high-profile part of ITSM tool vendor selling and marketing/messaging “conversations.” FrontRange in particular has raised the stakes on choice in terms of coining a new term “Hybrid ITSM” and making it core to its value proposition.

It’s an interesting term; perhaps one that is open to misinterpretation. This isn’t applying service management to hybrid environments (not sure if this warrants an alcoholic shot in the cloud-mention drinking game) but rather a reference to choice of delivery model. A choice that is not just at the outset of the customer-vendor relationship but one that can be considered and invoked during the life of the relationship. It offers flexibility to customers to change as business circumstances or needs change.

Where would or should it appear on the list above? I guess it depends on your organization. While FrontRange and others should be assessed based on tool features, prices, integrations etc.; it does offer another factor to consider. A factor that, with hindsight, I should have covered in more depth in the report – in fact, had FrontRange been in the report it would have certainly prompted me to include it. And this just isn’t choice – it’s the ease of moving between delivery models as and when needed.

A brief aside: “FrontRange aren’t in the report?”

If I had the proverbial dollar for every time I get asked why FrontRange aren’t in the report I wouldn’t quite be a millionaire but I would have a sizable dollar-bill collection – see this question on the related blog: http://blogs.forrester.com/stephen_mann/13-02-26-the_forrester_saas_itsm_tool_market_overview_who_is_where_with_what#comment-20887. The timing was just wrong for them as they put the finishing touches to product rebranding and they will definitely be in a future report update that will also most likely include ASG, AutoTask, and Citrix amongst others (as well as looking at how the existing vendors have progressed from both customer and capability standpoints).

It’s a sexy term. I’m not sure I like it personally due to a number of factors but it definitely seems to be working for FrontRange and at some point I might have to admit to being wrong – I think I have a hat I can eat. Looking beyond the terminology though, it’s a valid concern for customers – “what happens if …?” A concern that should be considered alongside the conversations that are currently being had around whether the on-premises or SaaS model is right for your organization. It’s a concern based purely on flexibility though. It’s not a scaremongering stance, we’ve seen too many of these over the years including:

The latest I’ve been quoted is that x% of SaaS “deployments” will be brought back on-premise by year Y; with X being considerable and Y not being that far away. Sorry for being vague – I’m assuming I can’t quote the stat as a non-client of the originator. I personally don’t believe it and even if I did I would place the blame firmly at the door of software/SaaS vendors selling poor capabilities and service, and customers not geared up to make best use of SaaS-delivered capabilities (or ITSM tools per se) rather than the SaaS-delivery model itself.

Increasing your chances of ITSM success

So I’m all for choice; but the future of on-premises, SaaS, or Hybrid ITSM tools is in your hands not mine. IMO it’s how you use the tools rather than the tools themselves that will most influence your chances of success. So is SaaS for you and do you see the benefit of choice as per Hybrid ITSM? As always your thoughts and comments are appreciated.

Biswajeet Mahapatra 6 days ago
Indian enterprises have had software as a service (SaaS) on their radar for the last seven-plus years, if not more. SaaS uptake in India was slow, and cost used to be the only major driver toward SaaS adoption. Indian enterprises were in dilemma when major software vendors shelved their on-premises solutions in favor of SaaS-only […]
Read More
Blog