In recent research, I have laid out some similarities and differences between tablets and laptops. But the tablet market is growing ever more fragmented, yielding subtleties that aren’t always captured with a simple “PC vs. tablet” dichotomy.  As Infrastructure & Operations (I&O) professionals try to determine the composition of their hardware portfolios, the product offerings themselves are more protean. Just describing the “tablet” space is much harder than it used to be. Today, we’re looking at multiple OSes (iOS, Android, Windows, Blackberry, forked Android), form factors (eReader, tablet, hybrid, convertible, touchscreen laptop), and screen sizes (from 5” phablets and to giant 27” furniture tablets) – not to mention a variety of brands, price points, and applications. If, as rumored, Microsoft were to enter the 7” to 8” space – competing with Google Nexus, Apple iPad Mini, and Kindle Fire HD – we would see even more permutations. Enterprise-specific – some vertically specific – devices are proliferating alongside increased BYO choices for workers.

It reminds me very much of the automotive industry. Automakers have had over a hundred years to get here, but today they compete in a series of specialized form factor micro-niches: Sub-compact. Compact. Sport. Sedan. SUV. Minivan. Pickup truck. Add to this energy models: Gas guzzler. Gas-based but efficient. Gas-Electric Hybrids. Plug in Gas-Electric Hybrids. Electric. Toyota (to take one example) competes in most of these market spaces, as seen at this link.

Comparing the end user computing space to the automotive industry isn’t a new metaphor, of course. In 2010, Steve Jobs compared PCs and tablets to cars and trucks:

When we were an agrarian nation, all cars were trucks, because that’s what you needed on the farm. But as vehicles started to be used in the urban centers, cars got more popular. Innovations like automatic transmission and power steering and things that you didn’t care about in a truck as much started to become paramount in cars. … PCs are going to be like trucks. They’re still going to be around, they’re still going to have a lot of value, but they’re going to be used by one out of X people.

On a purely historical basis, Jobs’ statement wasn’t quite accurate. (See Figure 1). Plotting the demand of cars versus trucks from 1931 to 2012, cars dominated for almost 60 years, before trucks caught up quite recently. Well, that’s interesting, right? I don’t think Steve Jobs imagined “trucks” as “PCs” in quite that context.

It’s important to note that automobile manufacturers makers have moved up and down the product chain to track demand.Carmakers constantly revisit their portfolio mix of cars and trucks, as this article shows. Evolving form factors haven’t necessarily benefited any single automobile vendor. Toyota, as of 2009, offered 70 different models of vehicles, each filling a specific market niche. But then, so does GM. They adapt, change, and compete as needed. 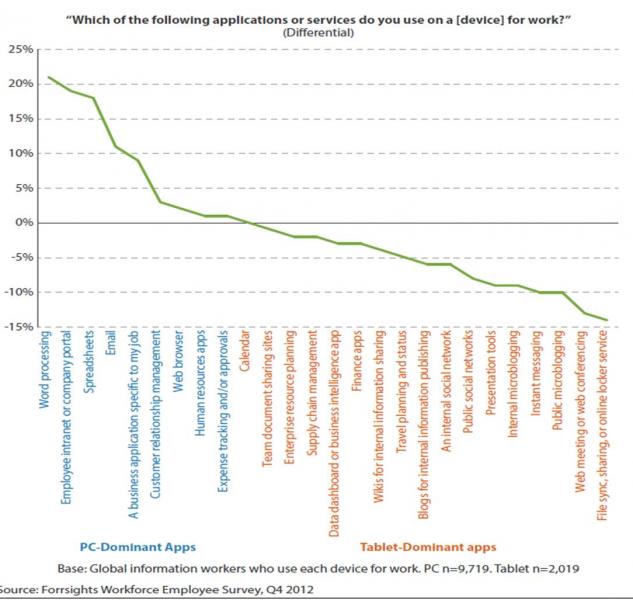 So far so good; the automotive metaphor seems to have some value for a discussion of tablets. But does this similarity between the automotive industry and the tablet computing market mean that the hardware space is destined to look like the automotive industry? That is, will it break into sub-markets (with “semi-nonsubstitutable” products) in which (for instance) “Sub-Compact Category Captures Almost 5% of Industry Sales” is a key headline? Following an automotive industry pattern, will tablets devolve into micro-niche categories instead of today’s discrete form factors?

The short answer is yes, the tablet market continues to fragment into differentiated niches. We’re undergoing a period of great experimentation in computing – everything from myriad tablet types to furniture PCs to wearable computing devices that run on the same platforms. Tablets will fill more specific enterprise niches; the tablet that works for a flight attendant on an airplane might not be the same tablet best suited for a field engineer climbing a tall electrical tower.

But the key to specialized tablets lies in device hand-offs.  While workers (and consumers) can own multiple devices, the coherence of the computing experience requires seamless handoffs. (For example, the way a photo taken on an iPhone can be synced to an iPad and a Mac via iCloud, or the way a document saved with Microsoft Skydrive Pro can be accessed across tablets and PCs).

Once device hand-offs are established, however, there’s still wallet share to contend with. There’s always a limit – both for IT departments but also for individual workers – to the amount of money that can be spent on multiple devices. Specialized devices will suffer from their lack of universality (and single purchase)… while even “single device” tablets like iPad struggle against laptops. One battle in the tablet wars pits specialized use devices vs. tablets that can replace laptops, desktops, or even phones. I&O pros will face unprecedented choice but also, in the short run, a great deal of complexity in navigating these myriad product permutations.