Recently we described an idea called the database of affinity: A catalogue of people’s tastes and preferences collected by observing their social behaviors on sites like Facebook and Twitter. Why are we so excited about this idea? Because if Facebook or Twitter or some other company can effectively harness the data from all the likes and shares and votes and reviews they record, they could bring untold rigor, discipline, and success to brand advertising.

But exploiting the database of affinity won’t be easy. Any company hoping to turn affinity data into something marketers can use will need three things:

When we started researching this topic, it seemed like a no-brainer that Facebook would best be able to offer marketers the database of affinity. After all, it’s by far the most dominant social site online; and it already possesses the largest collection of ‘likes’ anywhere online.

But the more we looked at the facts, the more obvious it became that Facebook isn’t going to win this race. Instead, Google is the company most likely to bring marketers a usable database of affinity. Surprised? Don’t be — Google can beat Facebook on all three of the criteria listed above: 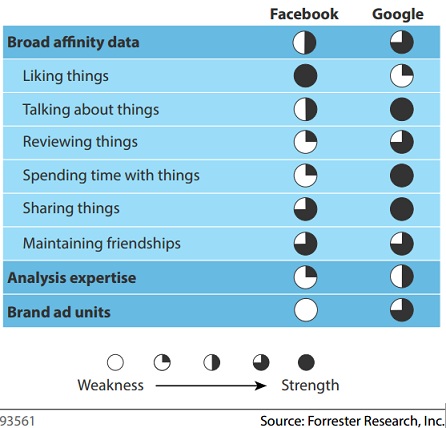 We're excited to watch Google and Facebook (and Twitter and Epsilon and a lot of other firms) race to build a database of affinity over the next few years — and we're excited to see how this idea will change marketing.

For more insight on how the database of affinity will develop over the next few years, Forrester clients can read our new report published today, How To Exploit The Database Of Affinity.