I am delighted to announce that for the first time, our annual US and European consumers and technology benchmark reports have a Chinese counterpart: The State Of Consumers And Technology: Benchmark 2012, China. This report is a graphical analysis of a range of topics about consumers and technology and serves as a benchmark for understanding how consumers change their technology adoption, usage, and behavior over time. The report, based on one of our Asia Pacific Technographics® surveys, covers a wide range of topics, such as online activities, device ownership — including penetration data and forecasts for smartphones and tablets — media consumption, retail, social media, and a deep dive on mobile.

For this report, we divided the metropolitan Chinese online consumers into three distinct groups based on their technology optimism and economic power: 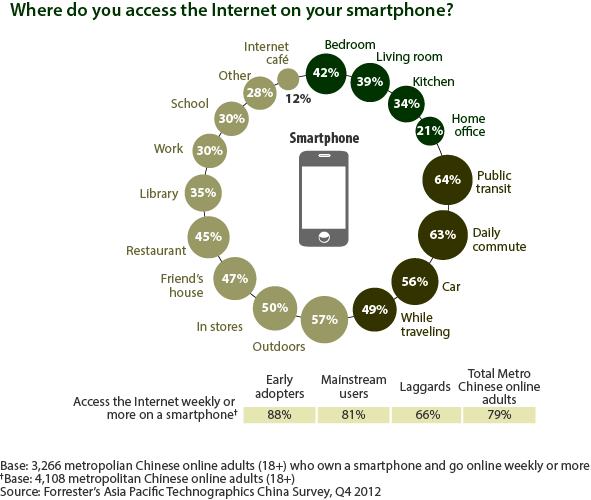 A few other interesting insights we uncovered about metropolitan Chinese online adults:

These insights show only the tip of the iceberg in terms of the information available in the report. We’ve based our analysis on Forrester’s Asia Pacific Technographics surveys. Technographics is the biggest and longest-running survey of consumers and technology in the world — and it covers the impact of technology globally on a variety of consumer markets, including automotive, consumer technology, banking, healthcare, marketing, media, retail, and travel. The Asia Pacific Technographics China Survey, Q4 2012 on which this report is based captures China’s unique profiles and market trends. Please contact me if you’d like more information.

[i] Metropolitan Chinese adults led in owning two or more mobile phones in 2011 in markets that Forrester surveyed.