Have you ever been in a client meeting that started with all of the elements of success and then, without warning, augured into the ground? These situations have all of the characteristics of a TV sitcom except a TV sitcom is explicitly designed to cause discomfort for the audience, while a meeting is not.

Or are they? I need to tell you about a meeting that went horribly wrong and how the Value Equation would have made a very big difference. While this seems like a worst-case scenario, elements of this story happen much more often than we might believe and they undermine the value we create in the minds of buyers.

The CIO of a large global organization had called an all-day offsite meeting of incumbent technology providers with the objective of each provider presenting the CIO and three senior members of his IT team – Application, Infrastructure and Architecture – with information on new capabilities that will add value to the CIO’s strategy. Having clearly set the stage with this objective, each provider was given 60 minutes to present, and the host of the session went first. 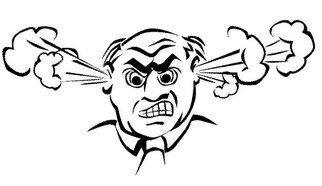 After introducing himself as the most senior sales manager on the account team, the first speaker proceeded to share his company’s new licensing structures that were “hot off the press from marketing” in slides littered with the phrase, “as your strategic partner in IT.” Less than 20 minutes into the presentation the CIO stood up – his face had turned beet red – and said, “If you call yourself a strategic partner one more time, I will ask you to leave THIS meeting in YOUR building.” The last 40 minutes of the presentation could not go by fast enough.

I spoke with the salesperson afterwards. He had approached his product marketing team with the request for content and narrative that highlighted “the latest improvements to [product x] that our customers are really happy about.” Product marketing had just finished an initiative to communicate how the previous, ridiculously complex license program (major procurement complaint by customers) had been made much simpler. The value-message seemed soooo simple – CIOs are concerned about cost, and the new license program would save time and money and other customers were giving glowing feedback.

The really embarrassing part is that the CIO’s organization was intentionally running an older release of code that was NOT impacted by either the ridiculously complex or shiny new license program anyway.

What went wrong and how did it happen so fast?

I want to use Forrester’s Value Equation Framework, to break down what went wrong. When I share this with people in marketing and sales roles, their eyes get wide.

Perceived Value – To whom? The word “customer” appears in the text above so often, but who exactly was in the room? The CIO and the VPs of Application, Infrastructure and Architecture. Who was the message for? Sourcing & Vendor Management. Because the word "customer” can mean so many different things to different people in sales and marketing (not to mention training, operations and portfolio) roles, direct matches between the audience and the message delivered is uncertain. 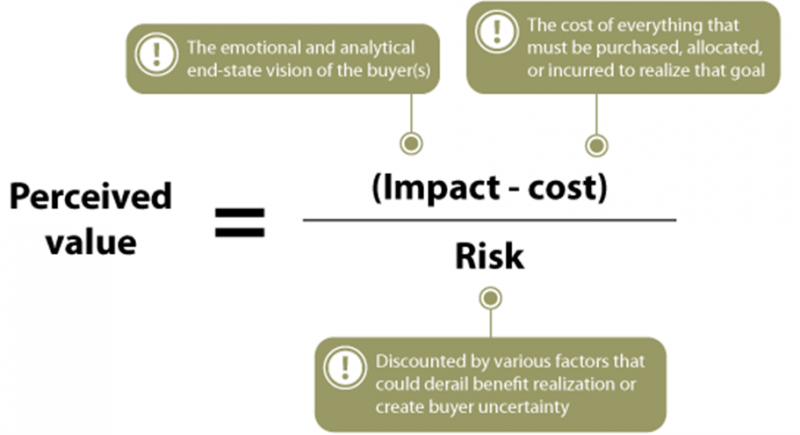 Impact – In the absence of information about “whom,” the plan of connecting to the end state vision of the real audience you are speaking to is uncertain. In this case, the audience of the CIO, and VP’s of Application, Infrastructure and Architecture were concerned about, “new capabilities that will add value to the CIO’s strategy.” The licensing message was having zero impact. In fact it was having a very negative impact; the CIO had been polite for 20 minutes before he became very direct. In addition, his perspective had changed from analytical (ready to learn) to emotional (very angry).

Cost – I did not speak to the CIO about this directly, but when I put myself in his shoes I would be thinking: “For the day-long meeting alone, I am incurring travel – almost trivial compared to the next one – and time costs – I have taken four high altitude resources away from my business and their time is being wasted – and distraction – my carefully crafted agenda and objective to align internal and external resources has been undermined in the first 20 minutes by this…” In this context, wouldn’t you be mad too? Purchasing anything from this provider is the last thing on the CIOs mind. At this moment, basic costs are very uncertain.

Risk – The very fact that the “most senior sales manager on the account team” was not aware of what release of their own software the CIO’s organization was running, eliminated any confidence that the vendor understood the CIO’s business reality. While speaking to the sales person, I did learn that because the CIO’s organization was such a big and important account, ‘the bosses’ thought the most senior sales manager should present instead of the sales person the CIO usually speaks with. I’m sure the CIO was anxiously thinking, “Where is the guy I know?” More uncertainty is injected into the situation.

Did you notice how often the word “uncertain” reappears as we broke down what went wrong? The purpose of an equation is to bring balance (equal sign) between a known set of variables until we remove uncertainty to a level where the equation is True. In the case of this meeting, using the Value Equation would have helped to:

1. Align both the sales and marketing efforts to the real audience. Instead of using content that was “hot off the press,” the sales manager could have been supplied with content on how other CIO’s and their teams have benefitted from the capabilities delivered through the next release.

2. Map and balance the messages to be delivered to that audience through Impact, Cost, and Risk as they relate to the roles (real people) in the audience and their business objectives. This means developing a deep understanding of the roles that the people you are selling to play in their organization. I’ve linked this blog to the existing Buyer Role Profiles that were involved in this meeting to help illustrate.

What meeting disasters have you seen or experienced, and how could have the four elements of the Value Equation helped?

Matt Steffen 2 days ago
Has your company’s demand and ABM program earned bragging rights? Nominate it for Forrester’s 2023 B2B Program Of The Year Award and showcase it on stage at B2B Summit North America.
Read More
Blog

Malachi Threadgill 5 days ago
As B2B marketing continues to evolve, addressing shifts in buyer behavior has become a top priority for marketing leaders. These shifts, driven by the proliferation of data, include the rise of buying groups and the preference for self-guided, anonymous, or pseudonymous buying journeys. After working closely with our practitioner and tech service provider clients and […]
Read More