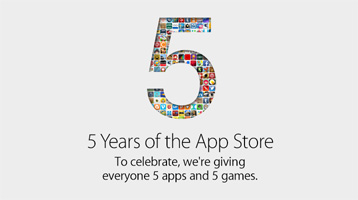 More often than not, people refer to 2007 and the launch of the iPhone as the key milestone that changed forever the mobile industry. Despite an incredible device, Apple struggled the first few months because its business model relied on sharing revenues with telecom operators instead of letting them subsidize its smartphones. The key milestone was in fact July 2008 and the launch of the Apple App Store because it symbolized a new era: the shift from hardware to software in the mobile industry.

While Apple was not the first app marketplace, it is fair to say it created the App economy. 5 years and 50 billion downloads later, where do we stand?

Ask console gaming companies what they think of disruption created by app stores (now a generic term following the end of the “app store” name lawsuit between Apple and Amazon) and you’ll get a sense of what the app economy is. We’re scratching the surface of changes to come but clearly the app economy enables brands (including those who do not have a  retail presence) to get insights on consumer behaviors to create new products and to distribute them at much lower cost. Numerous consumer app stores have flourished (more than 70 different Android-based app stores in China!) but few are really succeeding. Google Play has surpassed the Apple App Store when it comes to the sheer number of available apps and both have surpassed 50 billion downloads leaving competitors in the dust. However, volume does not matter so much any more. This is all about usage, personalization and recommendation.

Apple has paid out more than $10 billion to third party app developers to date. Looks impressive – especially bearing in mind the total only reached $5 billion in 2012. However, this is a cumulative stat since 2008 and does not represent that much ($4.3 billion in 5 years with a 30% commission) when you look at Apple’s quarterly revenues. Apps and content are the glu that sticks together Apple cross-device ecosystem but money still comes from devices. For sure, Apple still leads the pack in terms of mobile app monetization (App Annie found that Apple mobile app developers earned around 2.6 times more revenue than Android developers in Q1 2013). Even if the gap is closing with Android users, iPhone users are still more mobile-savvy especially when it comes to researching and buying products on their smartphones. Looking at stats from Distimo in June 2013, the most downloaded and the top grossing apps are still primarily about games and then about messaging apps (e.g, Facebook, WhatsApp, Skype, Vine, Line, Kakao). However, the money is not evenly distributed meaning a lot of developers are struggling to be profitable with their apps. Hopefully, brands are starting to create smarter apps that are connected to their CRM systems and to truly deliver differentiated experiences. We're moving away from the first generation of apps where most brands jumped into the iPhone app bandwagon hype without measuring the strategic implications of their consumers' mobile mind shift.

Google Play is catching up quickly, Amazon AppStore is leveraging clever recommendation tools, Facebook and other social networks play a key role in app discovery. Back in 2010 in “The Future Of Application Stores” report, Forrester mentioned that the discovery and merchandising of apps would be the next battleground. This will become an issue for Apple if they don’t act about it in the coming months. Despite the acquisition of Chomp more than a year ago and the new iOS7 announcement, not much has changed for Apple here. Let's face it, Apple App Store is still perceived as "black box" by most developers and brands. Differentiation will increasingly come from the ability of stores to provide marketing, reporting and merchandizing tools. It all about usage. It is all about making sure the right apps end up in the right hands.

Stephanie Liu 1 day ago
Collecting data without infringing on consumers’ privacy and ultimately sacrificing their loyalty and trust is a new marketing imperative. Marketers must avoid regulatory fines and reputational damages and lead the conversation on consumer privacy. Data deprecation, new privacy laws, and the cookiepocalypse are coming. You’re now past the time to revise your approach to data […]
Read More
Blog

Brendan Witcher 1 day ago
Wise retailers will be highly detail-oriented in their holiday strategies, especially given the macro-level conditions across many global markets.
Read More