Infrastructure professionals are now all too familiar with the dynamics of bring-your-own (BYO) technology and devices: Their workers walk into the office with consumer technology all the time. This post is one in a continuing series on how consumer retail stores act as de facto extensions of the IT department in today's BYO world.

The rumors have abounded for more than six months: unconfirmed whispers that Google will open up its own major chain of consumer retail stores. The company has dipped its toes into the retail waters with Chromebook-focused kiosks in the U.S. and the U.K. over the past few years, with installations inside larger retailers like Best Buy, Dixons, and Currys.

A Google Kiosk in the U.K.: Not Yet Reaching Revolutionary Heights 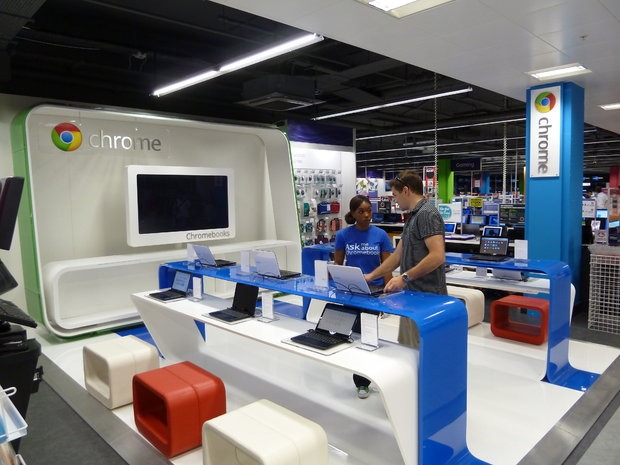 Yet while kiosks – particularly those staffed by Google employees – offer some value in promoting Google’s products and services, the company has a much greater opportunity for late 2013 into 2014. Kiosks aren't going to foment a retail revolution. To quote the popular Star Wars geek meme, "these aren't the droids you're looking for."

No, it's time for Google to think big – to go gangbusters. To do something nobody has done as well previously. Why is this imperative?

First, Google's competitors have already established their beacheads within the consumer retail space. Apple leads the market with its wildly profitable Apple Stores. These stores represent a top strategic asset for Apple, allowing the company to build entirely new product categories; without the Apple Store, there would have been no iPad. The Apple Store is simultaneously a social space for brand aficionados; a laboratory for product training; a high-quality service desk; and a discovery mechanism for new products.

Samsung rolled out a promising – if less ambitious – store-within-a-store concept this year. Using its own personnel, Samsung will articulate a brand experience and show the interoperability of its many lines of products – a puissant strategic move. Meanwhile, Microsoft is taking over the PC department of Best Buy, a necessary gambit but one fraught with perils.

Now it’s Google’s turn. And if Google lives up to its promise, the company can revolutionize consumer retailing in a way no company has since Apple. But they have to do it right… yet Google isn’t always the most patient organization, and its hyper-political decision-making can create pathologies.

Let’s say they do it right: What can the Google retail revolution entail?

All of these ideas are possible with Google’s deep pockets, portfolio of products and services, and technological prowess. Do they have the managerial chops to make such a gigantic splash, and shake up the retail world?