On September 23rd, Microsoft launched its next generation Surface and Surface Pro devices with a splashy media event in New York City. The improvements to the hardware and software of both models are largely incremental – though that doesn’t obviate the value of these releases, since gradual innovation has long been an industry hallmark, particularly for Microsoft.

Let's start by looking at what didn't happen:

Next, what did happen: Microsoft released updated hardware models and some fairly interesting accessories:

THE BIGGER PICTURE: IT'S ABOUT BRANDING AND GO-TO-MARKET

But the true success factors for the Surface line have relatively little to do with hardware itself. Instead, it's all about the strategy. Let’s start with branding. The original Surface television campaign — which one could describe as “vigorous” — featured 20-something dancers who particularly enjoyed jumping atop tables in random places. This branding suggested a fun device that directly competed with Apple’s iPad — never mind the fact that the Surface Pro weighed too much to be a direct substitute and that the tablet market was just beginning to trend toward 7” to 8” devices like Google Nexus 7 and Apple iPad Mini.

More to the point, Surface Pro’s actual strengths as a product lie in productivity (specifically, full Microsoft Office) and legacy compatibility with a variety of desktop-based applications. How did 20-something dancers map to these strengths? (Answer: they didn’t). Rebranding as a prosumer-oriented, productivity focused laptop-replacement  — rather than as a tablet — would be a wise direction going forward.

What did these dancers have to do with the Surface value proposition in last year's commercials? 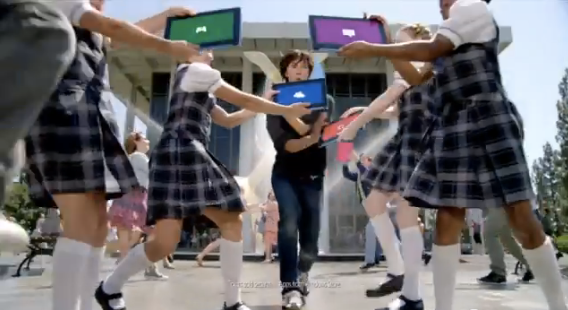 Even more importantly, Microsoft’s go-to-market strategy for Surface will be a key determinant of its success.

The new Surface products will offer workers and consumers an incrementally improved user experience, particularly when combined with the forthcoming release of Windows 8.1 on October 18th. But whether Microsoft can turn these second-generation products into a mass market success for enterprise customers, workers, and consumers will depend on its ability to quickly upgrade its branding and go-to-market strategies.

J. P. Gownder is a Vice President and Principal Analyst at Forrester Research. You can follow him on Twitter at @jgownder