Skip to content
< Blogs
Home > Featured Blogs > VMware Buys Desktone as the Desktop-as-a-Service Market Heats Up
VMware Acquires Desktone. What does it Mean?
In Barcelona this week, VMware announced that it is acquiring Desktops-as-a-Service provider, Desktone. This is a market I've been watching for several years, and I think this is good news for both Desktone and VMware customers. On one hand it provides an alternative for VMware prospects who are unsure whether they want to make the investment in ramping up an in-house VDI initiative, and it provides a scale-out option for existing VMware View customers who may be loathe to make additional capital investments to expand their capacity. With Citrix also developing their own homegrown DaaS infrastructure offering for service providers, this move further legitimizes the DaaS market.
Forrester has been tracking the rise in interest in DaaS specifically in our Forrsights surveys of IT decision makers for the past 2 years, which gives us a unique view into the market. In Figure 1 below, we can see the rise in IT decision-maker interest in DaaS relative to on-premise hosted virtual desktops, and see that year-over-year growth of DaaS interest is strong. The market accelerated in part because Infrastructure-as-a-Service providers see it as a way to monetize their existing infrastructure investments. 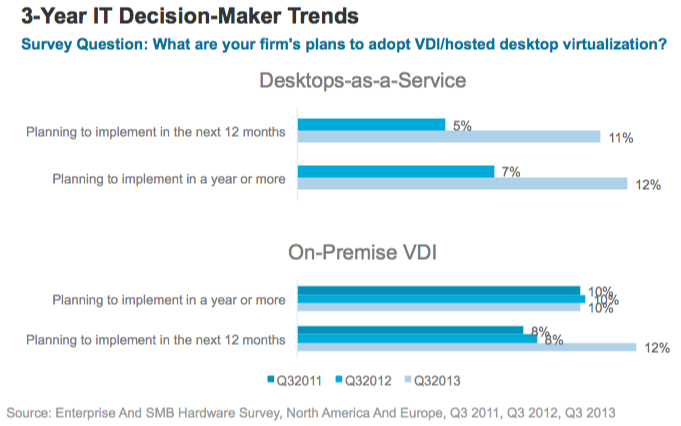