This morning Citrix announced the acquisition application mobilization vendor Framehawk for an undisclosed sum as the battle for high performance for corporate Windows apps on mobile devices rages on. Here’s my take:

It's a good acquisition for Citrix and in turn for I&O pros for 3 reasons:

What it means for I&O pros: If you’re struggling withCitrix XenApp performance over mobile networks, the Framehawk technology should help once Citrix announces more specific plans for incorporating it into their offerings. 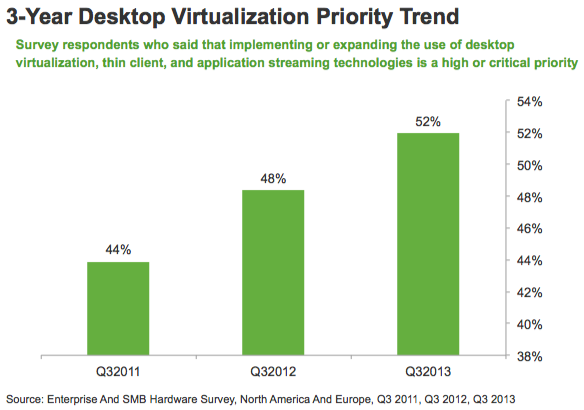 A Good Year for Desktop Virtualization Lies Ahead
Forrester expects desktop virtualization overall to have a good year in 2014. With the end-of-life for Windows XP coming up in April, Forrester is seeing a flurry of activity from IT clients whose Windows 7 migration plans are at risk, and virtualization technologies offer hope. This in addition to the growing trends toward mobility and BYOD will amplify the demand for technologies like XenDesktop and Framehawk that allow companies to defer upgrading or replacing older-generation Windows productivity and client/server apps while keeping the data itself safely inside the firewall.