Today Amazon launched full force in Mexico with items ranging from baby products to electronics to sporting goods—for the past two years, the company has sold only eBooks on its localized site in the country. Why Mexico now?

Mexico’s eCommerce market has risen on global brands’ priority lists. When it comes to eCommerce, Mexico is the India of Latin America: a small, early-stage market that has been overshadowed by rapid eCommerce growth in a much larger neighbor (Brazil in the case of Latin America, China in Asia). However, Mexico’s time has come. As Brazil’s economy has slowed to a halt, Mexico’s continues to grow—at the same time, the cost and complexity of operating in the Brazilian market has become apparent, leading many US and European brands to turn their attention north to the region’s second largest economy. In 2014 alone, Orange, Zara, Home Depot, Lowe’s and Williams-Sonoma all rolled out eCommerce offerings in Mexico.

Driven by a variety of different categories, the online retail market is growing rapidly. We often talk about eCommerce markets evolving in four phases (see graphic below). Mexico has very much followed this trajectory. Early-stage online purchases were largely in the travel sector—then as consumers started to make physical product purchases online, they gravitated to categories such as consumer electronics and computer hardware. Going forward, these categories will continue to grow but they will be augmented by later-stage categories like apparel, beauty and grocery. We expect Mexico’s total online retail market to grow by a CAGR of 19% between 2014-2019, reaching almost $7 billion by 2019. 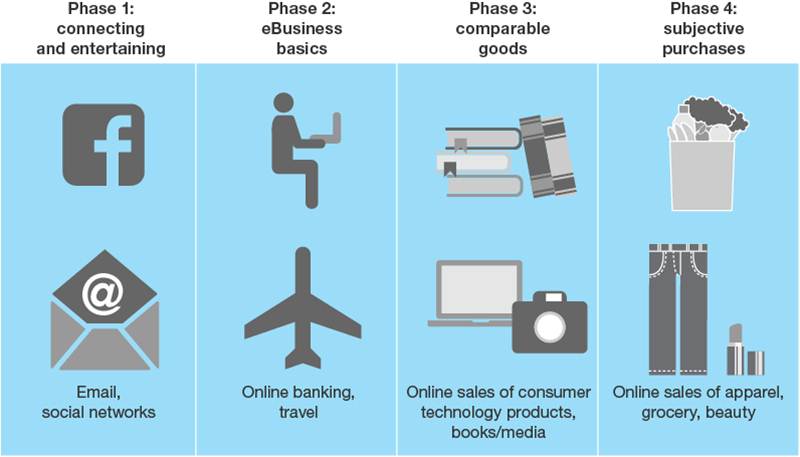 The competitive landscape remains dynamic.  Unlike some mature markets where eCommerce leaders have maintained their dominance for years, Mexico still sees newer players disrupting the market. While some leading players such as MercadoLibre have played a role in the market for well over a decade, newer eCommerce entrants including multichannel retailers like Walmart and web-only players like Linio have carved out sizeable roles in the online retail market.

The upshot for Amazon in all this? They enter a market that is sufficiently early-stage that they can be disruptive, but the small size of the market means profitability is unlikely to come short-term (clearly not Amazon’s top priority). And Amazon faces challenges not just in taking on existing competitors, but also in bringing shoppers online in a country in which the penetration of both bank accounts and credit cards remains stubbornly low. As in India, however, Amazon’s foray into Mexico is meant to entrench them in an early-stage market and ensure the company plays a role as the country’s retail market increasingly shifts online.

Jacob Morgan 4 days ago
Forrester’s European open banking forecast predicts a doubling of the adoption of open banking across countries, and use cases, from 2022 to 2027.
Read More
Blog