Social marketers have worked for years to justify ad budgets—and that effort is finally paying off. But if you’re a social marketer, and you want your social advertising to succeed, you’d be better off giving that money to your media buying team instead.

We recently surveyed 173 of the most avid social marketers in the world and found that the large majority are buying ads on social sites like Facebook and Twitter. More than two-thirds said they would increase their social ad budget this year. And in most cases, they told us the social team or social agency was responsible for this social ad spending.

But it turns out social teams aren’t very good at spending social ad dollars. Sure, social practitioners claim they’re as good as media buyers at getting value from Facebook ads — a claim few can back up — but even the social marketers themselves they admit to lagging far behind their media-buying peers on other sites. 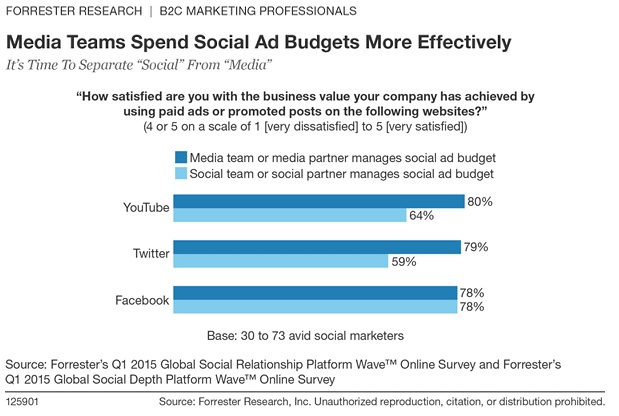 So what should you do with your social ad budget? Take a lesson from some of the most successful social advertisers and give almost all of your social ad dollars to the media team, rather than to the social team:

For more data and insight on this topic, Forrester clients can read the research brief I published with Richard Joyce, “It’s Time To Separate ‘Social’ From ‘Media’.”

Jessica Liu 4 hours ago
In this corner … consumers and privacy concerns. And in the other corner … companies prioritizing personalization in their business objectives. Who will win this fight of opposing forces? For too long, companies (and particularly marketers) have tried to drive efficient customer acquisition with “personalized” experiences and by hyper-targeting individuals. But there is a disconnect […]
Read More
Blog

Mary Pilecki 1 day ago
As one of the most popular loyalty programs in the world, the stakes for the Starbucks Rewards program are high. Today, the program boasts nearly 29 million active members, and over half of Starbucks sales are driven through the program. Starbucks Rewards members collect “stars” for every purchase they make, redeemable for free drinks, food, […]
Read More