Skip to content
< Blogs
Home > Featured Blogs > The Data Digest: Wear, Why, And What Next?

For US online adults, wearable technology is no longer the stuff of myth. Over the past year alone we’ve witnessed the launch of the Apple Watch and iterations on early wearable products. Wearable devices are now making their media cameo across a variety of channels and topics ranging from politics to pop culture.

According to Forrester’s Consumer Technographics® survey data, around one-fifth of US online consumers use a wearable gadget. While the adoption rate is higher among young, wealthy males, wearables are already breaking into segments that aren’t typically considered among the early adopters. Most individuals tend to use the technology for health- and fitness-related activity; however, consumers demonstrate a growing interest in using wearables for several different functions: 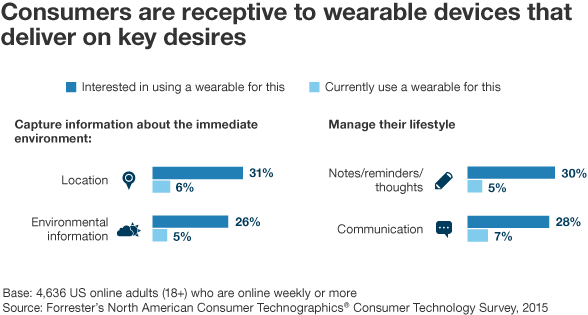 The number of current and potential wearable device users is impressive — but the story doesn’t end here. Certain barriers prevent today’s wearables from becoming engrained in consumer lifestyles, causing individuals to reduce their device usage, exchange their current device for another, or abandon their wearables altogether. At the same time, more sophisticated software and additional apps set the stage for wearables to disrupt entire industries. What does this indicate about the life cycle of the wearable device and its impact on future consumer behavior?

My recent report uses a combination of quantitative, qualitative, and passive listening data to explore the pain points and opportunities characterizing today’s wearable device experience. As consumers move beyond the point of pure fascination, they must realize immediate value from their wearables or they will toss them out for the next big thing.

Kim Herrington 6 days ago
Get seven actionable tips on how to improve your data storytelling in this preview of the upcoming Data Strategy & Insights event.
Read More
Blog