Everybody can name their favorite apps. But can you name even two mobile websites you love? We can't. So we stared into the awful maw of the mobile web to learn how to fix it. 65 companies signed up to help. Along the way, we found problems stemming from the journey you've taken to be in your customer's pocket.

My colleague Danielle Geoffroy brilliantly realized that it was a drunk history, so we wanted to share it with you.

Conclusion: Most customers won't use your app. Therefore, you need to fix your mobile website. (And, no, responsive web design alone is not enough.) We're writing two reports to help you figure it out. First, the painful truth, a Forrester report: "A Billion Mobile Sites Spark No Joy." The second report, "Reinvent the Web for Mobile Moments" is coming in a month or so. Let me know if you want to talk about it.

And now for the drunk history. Thanks, Danielle! 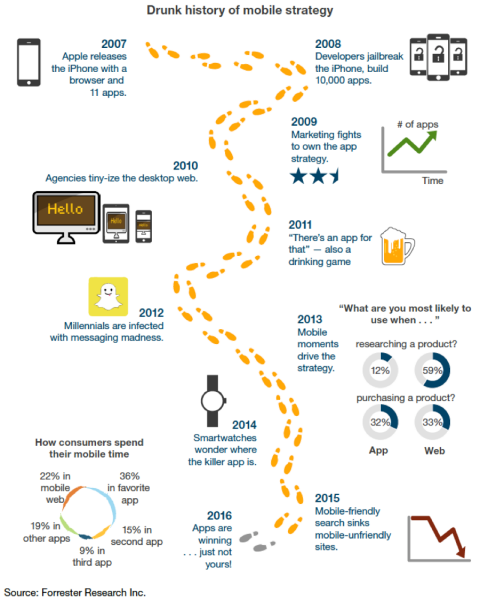 Dario Maisto 1 day ago
Enterprise resource planning (ERP) vendors are pushing client organizations to replace their on-premises ERP solutions with cloud-based digital operations platforms (DOPs). As a result, ERP discussions are filling up the agendas of CTOs and procurement officers. The increasing number of inquiries that we at Forrester receive is a clear signal that the market is moving, […]
Read More