Many are calling Super Bowl LI the greatest and most exciting Super Bowl ever, as the New England Patriots came roaring back to accomplish one of the largest comebacks in NFL history. For the fans involved, it was a whirlwind of emotions, and they readily took to social media to express them. To get a better sense of these fan emotions, we analyzed Twitter feeds from Massachusetts and from Georgia, captured during the game with a new cutting-edge emotion algorithm developed at Forrester. The results of our analysis paint a clear picture of two very different roller coaster rides. Atlanta Falcons fans went from the joy of a sure win to the disgust and sadness of having victory snatched from their hands — quite literally, considering Julian Edelman’s ridiculous catch with just over 2 minutes left. Patriots fans, on the other hand, quickly regained the sense of anticipation they had felt when beginning the game as the favorites (perfectly inverted with their sense of disgust, which peaked when their team was down 25 points), culminating in a combination of surprise and joy at pulling off such an improbable comeback. 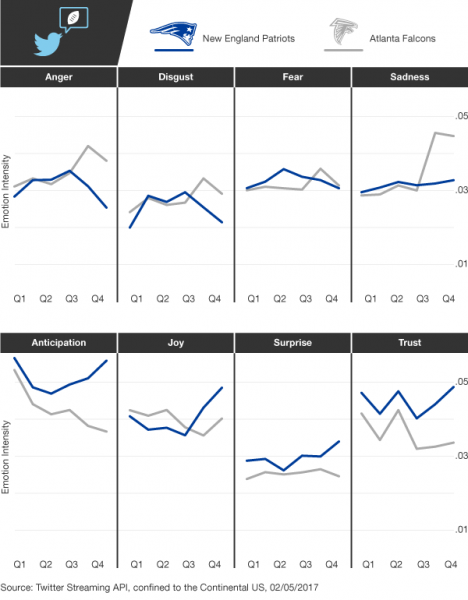 While exploring the emotions related to a sports team is a compelling exercise, it highlights the fact that understanding consumer emotions also plays a key role in their relationships with the products and brands they interact with. In fact, we’ve shown that customers’ emotions have a major impact on their perception of their customer experience and, in turn, on their loyalty.