Skip to content
< Blogs
Home > Featured Blogs > Alexa Will See You Now: Why Echo Has A Camera

Today Amazon announced the latest addition to its Amazon Echo line of Alexa-enabled devices. The Echo Look is the first Echo device to include a camera. It will not be the last. Adding a camera is the smartest next move for Amazon even though it will trigger an "ick" response by people nervous about Amazon looking into their homes. First, the details. 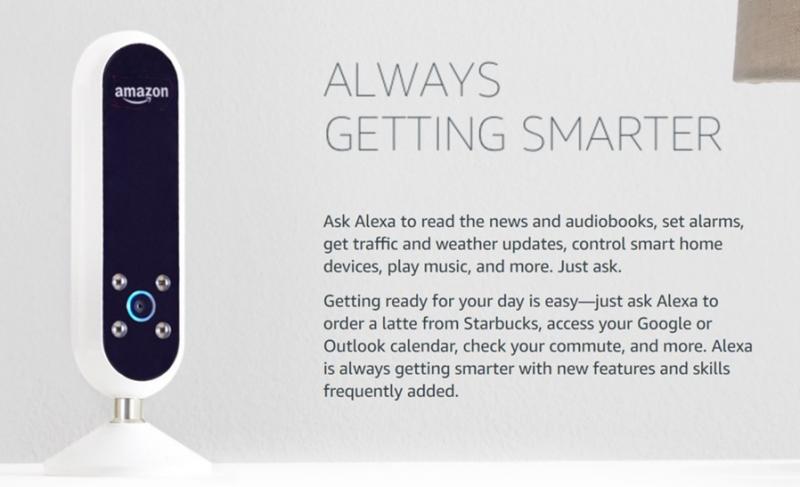 Echo Look is being positioned as an Alexa device that can also take your picture or capture video hands free. By playing on a double meaning of the word "look" the company baits a nice marketing hook because it then goes on to emphasize that by looking at you, the device can help you "love your look." How? By fulfilling a portion of the long-hoped-for magic mirror concept I first wrote about in 2011. The magic mirror would look at you and help you make yourself over. While many companies like L'Oreal and Rimmel have adapted this concept for use in a mobile phone makeup app, nobody has yet gone for the full-body closet assistant we described in 2011. (Actually, there are several of these available in upscale dressing rooms, but none available for in-home use.)

Echo Look doesn't quite get there, but it makes useful steps in that direction. There is no fixed monitor acting as the mirror, but the camera does capture your image and routes it to your Echo Look app to provide various style-focused features. You can look at yourself, comparing two outfits, for example, or you could build a style library of your outfits over time — including the ability to review what you wore when, to make sure you don't repeat your wardrobe in front of the same important client. Or you can submit two photos of yourself to a Style Check service, where the app will algorithmically draw on its visual database of clothing to determine in which photo you are looking trendiest.

These are all modest services, sufficient to capture attention. But they are not really the point. The more important point is getting cameras into the home, all of the home. That's the endgame for intelligent agents like Alexa. Amazon's Echo device family has given it a huge lead over Apple's Siri, Google's Google Now, and Microsoft's Cortana. Adding a camera long before the others even have environmental voice interfaces on offer (or widely embraced, in the case of Google Home), cements Amazon's leadership position.

Adding a camera was always the plan. I wrote that in 2011:

In that original prediction, I didn't foresee that Amazon would build its own cameras. But I did understand why Amazon would be uniquely able to justify investing in this kind of customer relationship: Amazon sells stuff that Echo Look looks at. Selling you clothing to match your wardrobe is something that will further infuriate the apparel business where retailers like bebe and American Apparel are shutting down thousands of stores right now if not going out of business entirely.

The focus on a harmless category like fashion gives Amazon a business model justification for doing what it wants to do anyway: fill your home with cameras that will extend Alexa's understanding of you as well as her ability to help. The good reasons to do this are many: 1) two-factor authentication for when you request something with your voice that costs money or is sensitive — the camera acts as your proof of identity; 2) home security; 3) pet and child monitoring — a huge part of Dropcam's success; and eventually 4) continuous metatagging of you, your behavior, and your environment to provide very frequent, emotional, and hyperconvenient services.

Easy examples abound: you pull a milk carton out of the fridge and instead of putting it back, you throw it in the recycling. Today you might ask Alexa to add milk to the shopping list, with an Echo Look in the kitchen (where it will be much more useful than in the bedroom), the camera will notice that you need milk and either order it or ask you to confirm the order, depending on your preferences. You think you need to fill your house with Amazon Dash buttons to reorder things like laundry detergent? No need, just let the camera figure out which brand you are using and that you are about to run out (a smart algorithm doesn't have to wait for you to throw the bottle away, it can tell from the angle of your pour that it is almost empty).  From a July 2014 report I wrote about Amazon's customer relationship:

Home monitoring cameras create continuous digital relationships. …Security cameras, as people think of them today, provide a continuous digital relationship with the user. Some Dropcam users check on their apartments, their dogs, or their kids with them multiple times a day. That high-frequency relationship makes for a perfect entry point for a bigger home control experience. That's exactly what Google will do with Dropcam, eventually reducing the price of the cameras and perhaps even giving them away for free to premium members (a la Amazon Prime) to cement the relationship.

In that prediction I got one thing wrong: the price. Echo Look is $199 today, it will fall to $99 a year from now, certainly. But I have long advocated that Amazon should give these things kinds of things away (something I argued about Amazon Echo before it was even invented when I predicted that Amazon would eventually get into this business). They'll recoup all of that investment for sure. The real limiting factor is probably the demand. If Amazon gave them away the company couldn't make them fast enough.

I won't spend time trying to convince you that people will tolerate this supposed invasion of their personal space. I've written about that over and over as well. They will. You will. The offer just has to be good enough and Echo Look is a good enough start for many people that will soon be followed by other camera-equipped devices, all of which will unlock skills that brands are dying to be able to deliver. Imagine a Benjamin Moore skill that uses camera images from multiple rooms in your home, all captured under different lighting, to propose new paint colors to you. Or a Wayfair skill that intelligently constructs 3D models of what your rooms would look like with Wayfair furnishings. All of this happening without you asking for it, then presented to you in a way and time that is right for your individual preferences — and even tailored to your current emotional state (more on that topic later, I'm working on a hot report about emotion, stay tuned).

James McQuivey, Ph.D., is a vice president and principal analyst at Forrester. In his career he successfully predicted the commercialization of the Internet, the rise of online retail, and the arrival of Amazon Echo. He is also the author of Digital Disruption.

Christina Schmitt 1 day ago
Technology is not the exclusive core expertise of IT anymore. For many years, technology has had a place in the B2B marketing strategy and represents a big part of marketing’s responsibility. In addition to implementing and running the relevant marketing technology, marketing requires the knowledge to use it effectively to drive the revenue engine, create […]
Read More
Blog

Karen Tran 4 days ago
Companies' pledges to become more sustainable are encouraging — if they translate into action. Marketing leaders must work to ensure that messaging aligns with action and purpose.
Read More