RIM co-CEOs Jim Balsillie and Mike Lazaridis have stepped aside to let a new leader pilot RIM through the straits. Thorsten Heins, a hardware executive from Siemens, has been COO for about a year now. Welcome, Mr. Heins, to a rough sea and dark night. But there is light in the depths of the hold. (Okay, enough ship references. Down to business.)

Here's the straight story: RIM has been focused on the wrong assets for the past three years, competing in a consumer market against the most powerful consumer brands in the world and suffering from tablet night terrors. It's not working. Forrester's data is clear: Based on a survey of 5,000 US information workers in May 2011, RIM's share of employee smartphones has dropped from around 90% to only 42% in the US in the past three years. Apple and Android together now have 48% of that installed base.

Stop fighting the consumerization battle. Fight a battle that takes advantage of what made RIM a fabulous company in the first place: its secure data delivery network. Here's the differentiated asset analysis: 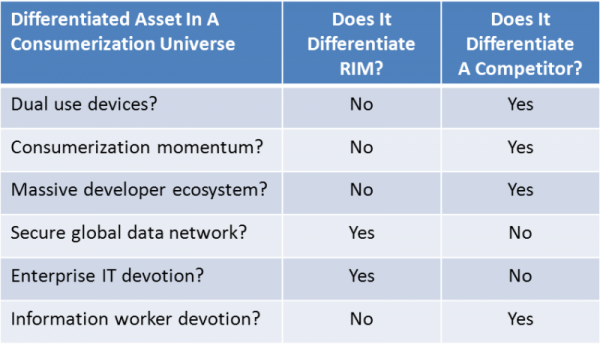 With this analysis in hand, the challenge and the opportunity become clear. It's the business and government IT relationships and the RIM secure global data network that differentiate RIM products and services, not the consumer market demand. No other mobile supplier in the market has foreign governments asking for access to its data network in the interest of their national security. (That government interest is a good thing — it signals just how potent RIM's network is.)

Based on that asset analysis, here is an investment checklist with a focus on differentiation and customer value. Thorsten and team should prioritize investments that answer yes to these questions. Does the investment:

What would you add to this checklist?