I’ve been thinking a lot about exponential technology and asking myself: “Is disruptive change due to ‘Moore’s law’ done?” Newsweek recently proclaimed, “The Future Of Technology Is Uncertain As Moore’s Law Comes To An End.” However, while most experts agree that silicon transistors will stop shrinking around 2021, this doesn’t mean Moore’s law is dead in spirit — even though, technically, it might be.

Chip makers have to find another way to increase power. For example, there are Germanium and other III-V technologies — and, at some point, carbon nanotubes — that provide new ways of increasing power. There is also “gate-all-around” transistor design, extreme-ultraviolet and self-directed assembly techniques, and so on. But how will more powerful CPUs drive future disruptions? I don’t know for sure, but I suspect not as much as other exponential trends and the technologies that exploit them. Here is what I’m thinking:

Exponential technologies are low-level IT innovations (often occurring at the physics level) that produce infrastructure with fundamental measures of power that increase or decrease by 100% at periodic intervals — like Moore’s law. While physics limits are bringing Moore’s law technically to an end, I see other non-CPU compute paradigms emerging that will keep driving overall compute power up and costs down. For example, HPE is pioneering neuromorphic and optical computing, and IBM, Google, Rigetti, and D-Wave Systems are driving advances in quantum computing. These new compute technologies provide orders-of-magnitude performance increases for solving certain kinds of algorithms. They also have power measures that behave exponentially.

Furthermore, there are a number of other exponential laws that stand poised to keep spawning waves of disruption, with Metcalfe’s law on the power of connected networks and Gilder’s law for connectivity as examples.

Series of related technologies that build upon one another synergistically to create breakthrough opportunities.

The disruptors we study build breakthrough solutions that leverage tech innovation chains to establish new, disruptive business norms. Amazon does this constantly, for example. As just one example, it leveraged falling infrastructure costs (mostly driven by Moore’s law) to exploit infrastructure virtualization and create cloud computing. It built systems of insight, using big data analytics and digital systems of engagement software innovations to create breakthrough solutions in eCommerce. This created a new business norm of “I can get anything I want while sitting at home watching TV.” Netflix and Uber have similar stories, as do many other disruptors. I wrote about this in my report, “Technology Innovation Chains Create Breakthrough Opportunities.”

Here is the thing: Firms that have created market-leading positions with breakthrough solutions built on chains of technology innovation and exponential trends aren’t sitting on their backsides. They are widening their leads because they can accelerate faster than less-digital competitors. When speed is the name of the game, exponential trends can be your biggest friend or your worst nightmare. 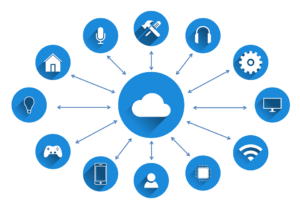 Lastly, of all the exponential enablers, Metcalfe’s law is the most important going forward. Consider: Anything that is connected generates network traffic. As each new thing connects to a network, the power almost doubles (as networks get large). That’s exponential change! Think about what this means for autonomous systems. Check out swarm intelligence. It’s an interesting new technology breakthrough in which lots of small connected autonomous things learn in a distributed way to carry out tasks together. As swarms add members, their power to do things continues to increase exponentially. The key for things like swarm intelligence to take off, in my mind, is technology that enables event-driven location architecture that doesn’t depend on GPS. For example, check out XYO Network.

Expect lots more on this in my upcoming research and future blog posts. Do you have an interesting exponential tech example to share? Let me know.

Paul McKay 7 days ago
Customer requirements and business needs are constantly changing. In order to successfully address those shifts, organizations are left with no choice but to align their ecosystems. Enterprise architecture (EA) is key when it comes to rewiring business capabilities to a value-driven approach and reinforcing organizational preparedness for future. The Forrester Outcome-Driven Architecture Model is founded on architecture […]
Read More