After a tumultuous 2018, Facebook’s fate looks bleak. While the characteristic hope of the New Year lingers, you might look at the glimmers of positive news around Facebook with optimism: Advertisers are still using it; the company is investing in local news partnerships in a public display of its commitment to quality reporting; and consumers aren’t deleting their accounts in panic. But don’t be fooled by this temporary veneer of salvation: After all, Rome didn’t fall in a day.

Facebook’s value is only as strong as its network of users; to diagnose the true state of the social network, you must tune into the tenor of its user base. This means pulling back the curtain on current behavioral data to analyze consumers’ emotion and energy — the underlying forces that drive consumers to engage with or withdraw from a brand.

As Facebook’s values and practices were pummeled in the media and in interrogations on the Hill last year, we applied Forrester’s Consumer Energy Index to continuously monitor the ebbs and flows of consumer energy around Facebook. Our data explains why assumptions about the resilience of Facebook’s brand are wrong and signals a slow but persistent shift in consumer perceptions that threatens the social network’s future: 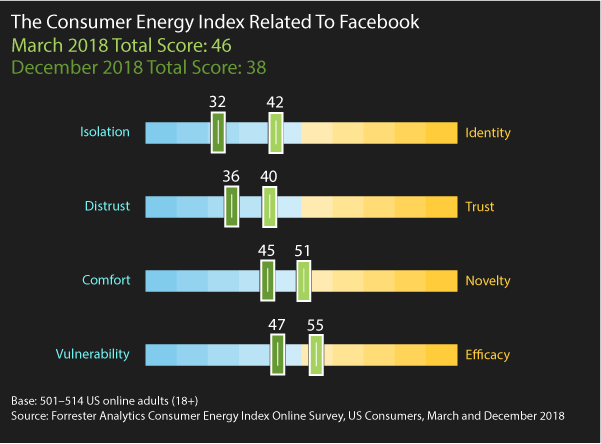 Despite Facebook being embroiled in controversy, advertisers continue to rely on the platform because of its radically simple user experience, wide reach, and promises to improve transparency for marketers. But CMOs: As Facebook burns, don’t be the one caught playing the fiddle. True customer obsession requires you to be thoughtful about Facebook’s vulnerability. Carefully consider the value that Facebook offers your consumers — and be intentional about the effects of your marketing content. Simply reaching consumer eyeballs is not enough to capture consumer mindshare; rather than just feeding the machine, deliberately design content that stimulates emotion and resonates with your consumers’ energy, their values, and the values that your brand represents.

Christina McAllister 4 hours ago
We look at a few ways that retailers can use messaging to support customers through the holidays and beyond.
Read More
Blog

Julie Ask 6 hours ago
Healthcare and life sciences companies: Fill out Forrester’s executive survey in exchange for personalized feedback on your state of digital experiences, as well as key industry benchmarks.
Read More