There seems to be a renewed interest in Africa. Is it that those who follow emerging markets have tired of China and India?  Is it the recent events in North Africa that have sparked interest and hope for the region? Or could it be that, as McKinsey Global Institute put it, at least some African countries “have turned a corner and are now on the path to sustainable growth and poverty alleviation?” 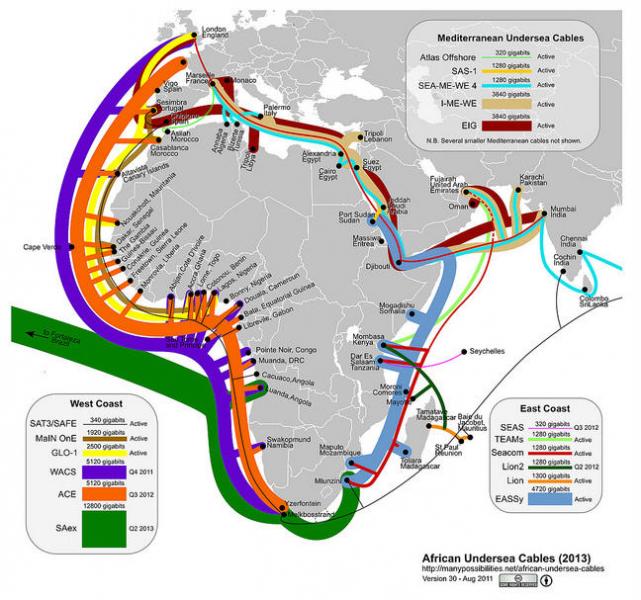 From a technology perspective, it is also likely that finally with recent developments in both undersea cable and satellite links, the Internet has arrived in a way that makes Africa a viable market for ICT. And by that I mean not just for low-cost, bottom-of-the-pyramid solutions and not just South Africa, both of which have long been on the radar of some technology vendors for some time.

I’ve been studying Africa on-and-off for over 20 years now. In 1989 I took a one-way ticket to Bujumbura, Burundi (yes, I did have to look it up on a map first), traveled to Bukavu, Zaire (now Democratic Republic of the Congo), where I spent the summer, and eventually settled in Bossangoa, Central African Republic, where I was a high school math teacher for two years. At that time there were no telephones in my city although it was the largest in the region, and only limited lines into and out of Bangui, the capital. I spoke to my parents three times in two years, which is very hard to imagine in these days of Skype and Facebook. Needless to say much has changed in Africa as well.

Today, HP has announced its plans to increase investment in Africa as part of its new Growth Markets strategy. In addition to its existing presence in Algeria, Kenya, Morocco, Nigeria, South Africa and Tunisia, HP will open 10 new offices across the region, including Ghana, which was announced yesterday. (Additional countries will be identified later this month.) In opening these offices, HP stresses its commitment to investing and developing local talent, through hiring local managing directors. First priority in the new Africa strategy is a focus on (1) investing and developing in academic partnerships to develop talent (2) and empowering governments through technology, primarily through education, health and connections to “out of reach” communities.

HP also plans to explore innovation coming from Africa. As we’ve seen in the case of India, often innovative local solutions can address needs better than products and solutions imported from more advanced markets. Africa itself has been a source of such innovation and in some cases has leapfrogged more advanced regions. Mobile banking, for example — including mobile banking for the unbanked — is more advanced in South Africa and Kenya than elsewhere. However, local innovation can be balanced with global standards and technologies: using mobility in new ways, leveraging collaboration tools to strengthen existing networks, etc.

While the strategy of working through schools and governments makes sense in the context of emerging markets, vendors shouldn’t limit themselves to bottom-of-the-pyramid approaches, or programs spawned through corporate social responsibility (CSR) initiatives. With the appropriate incentives and opportunities, a middle class emerges quickly — as we have seen in India and China — bringing with it greater disposable incomes and growing aspirations. In fact, the OECD estimates that the global middle class will grow by 165% from 1.8 billion to 4.9 billion between 2009 and 2030 but will grow by 235% in Sub-Saharan Africa alone (although absolute figures are still dwarfed by growth in Asia). Equally so, the enterprises and small business markets will grow. Forward-looking governments will improve the environment for doing business in their countries, with an eye to improving their position on the World Bank’s Doing Business index.

HP is right to work closely with governments in Africa to drive investment in infrastructure and services. But a focus on investment in infrastructure and human capital is inherently long term. HP should balance that longer-term vision with immediate opportunities, such as with local telecom operators and service providers leveraging rapidly improving bandwidth to provide innovative mobility and cloud services. The message also should not be exclusively BOP, but rather address the whole pyramid and the dynamics of that pyramid in high-growth markets.

In sum, HP must remember to:

In two weeks, I will be traveling to Mauritius. Stay tuned for some first-hand observations.

Dario Maisto 22 hours ago
Growth Despite Turbulent Surroundings 2022 was a tough year, and economic forecasts show uncertainty about what will happen in 2023. Complex global geopolitical conditions see constant announcements of budget cuts, layoffs, and tech execs’ priorities being reshuffled. Service providers are expecting growth in 2023, however, with a new focus on partnerships, delivering co-innovation, and building […]
Read More
Blog

Ted Schadler 1 day ago
On average, companies spend 28% of their technology budgets on technology services. Those budgets have increased by 13% over the past four years (and, for custom software, by 20%). And we don’t see this trend slowing. This lively and vibrant sector is both a fast follower of enterprise demand and an instigator, supporter, and sometimes creator […]
Read More