BlackBerry CEO Thorsten Heins made news this week with his claim that tablets will be dead in five years. “Tablets themselves are not a good business model,” he claimed in an interview.

As Techcrunch wittily responded: “BlackBerry CEO Thorsten Heins Says Tablets “Not A Good Business Model,” Evidently Forgetting About iPad.” As I recently blogged, Apple’s iPad is the growth engine of its entire business so far in 2013, growing 65% year over year. Meanwhile, shipments of Android tablets have found their footing, particularly for Samsung, ASUS, and Amazon, growing in shipments so far this year.

So tablets certainly represent a thriving business model today. More importantly, the tablet will grow into a must-have computing device for much of the world by 2017.

The penetration of tablets into the consciousness of information workers, IT professionals, business people, and consumers only continues to grow. Much as with smartphones, tablets are increasingly taken for granted as a device one will have in one’s life.

Take, for example, information workers: We surveyed 9,766 global information workers about their preferences for which operating system they would like to use on their (next) work tablet. We also gave them an out: “I don’t plan to use a tablet for work.”

Information workers overwhelmingly had interest in tablets: Only 17% of global information workers overall replied that they didn’t plan to use a tablet for work. The other 83% chose specific operating systems (iOS, Windows, Android, etc.) that they would like to use on a tablet for work. There was some variation by country, as seen in the Figure below, but the widespread reaction among workers was to choose a tablet.

Figure: Given The Choice, Information Workers Say They Plan to Use A Tablet For Work 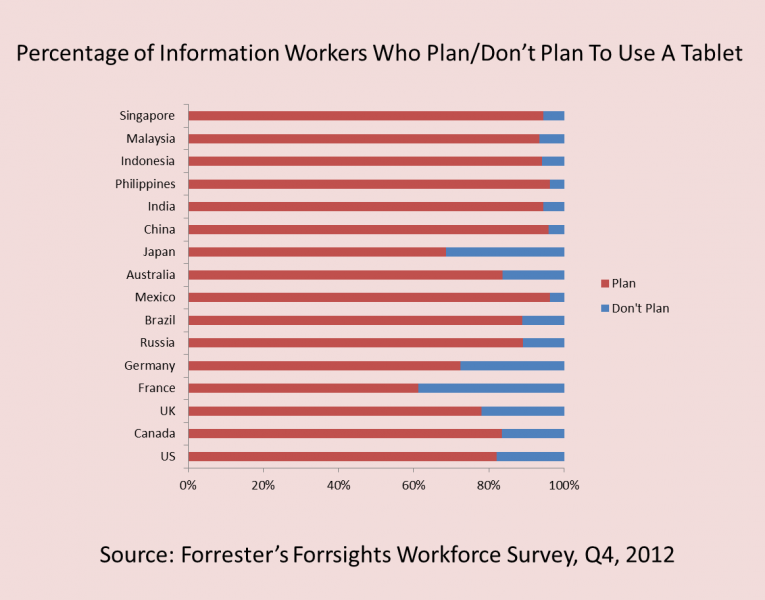 The drivers of tablet adoption continue to include these (and other) factors:

The smartphone offers users immediate, contextual, simple, fully mobile experiences. PCs sometimes remain the right tool for the job. Tablets offer hyper-portable, larger-screen experiences that partly cannibalize laptops while also yielding tablet-dominant applications. The three products increasingly complement one another, as users find each to be useful in its own context.

The bottom line: Plan on a majority of information workers using tablets in five years.