Yes, you read that right. There were 1.25 billion global information workers in 2018 — people that use a smartphone, PC, or tablet for work an hour more per day in a typical week. This number may seem astronomical . . . but in reality, the growth of information workers has just begun. New devices and innovations have flooded the market, making digital devices even more useful for work, so companies will be able to expand digital assistance to more tasks and more types of workers, far beyond white-collar office workers. The result is gains in productivity, efficiency, and business outcomes. 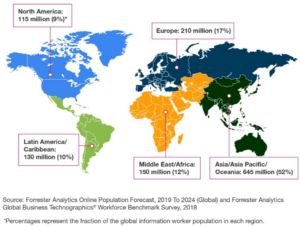