Agencies appeared in the mid 19th century as retailers and manufacturers recognized they could communicate with the masses through the explosion of newspapers during the Industrial Revolution. From that point on, agencies adapted to changes in mass media (e.g. TV, radio), society and business. That is, until the rise of the Internet at the end of the 20th Century. At that point, most traditional agencies (whether creative, PR, full service or other) were slow to adopt interactive skills which opened the door for a new kind of interactive agency that would work with a new kind of marketer focused specifically on the digital space.

Yet now we're entering into a new era of marketing, an era that Forrester calls "The Adaptive Marketing Era". In this era, interactive and digital technologies become the foundation of marketing communication. Agencies today recognize this and the recent explosion of social computing has in many ways broken down the walls between agencies as virtually all agencies are trying to own it for their clients. This in turn as opened a door for a new set of specialty agencies and consultants (e.g. Powered/Crayon, Converseon, etc.) and has created some significant confusion for marketers as to the roles of agencies. They see Crispin Porter + Bogusky build out the skill sets of an interactive agency, interactive agency R/GA win the role of lead agency for Ameriprise, media agency Starcom Mediavest reposition themselves as a "human experience" agency focusing on a more holistic media experience, and they see PR agencies like Edelman make significant strides into the interactive space through social media. This leads to frustration for marketers. According to our research, most interactive marrketers don't trust their traditional agencies with digital work and yet most don't believe their interactive agencies are ready to lead yet either. All of this creates somewhat of an agency purgatory – where different agencies try and take on each others' roles but no one type of agency is ready to take over. 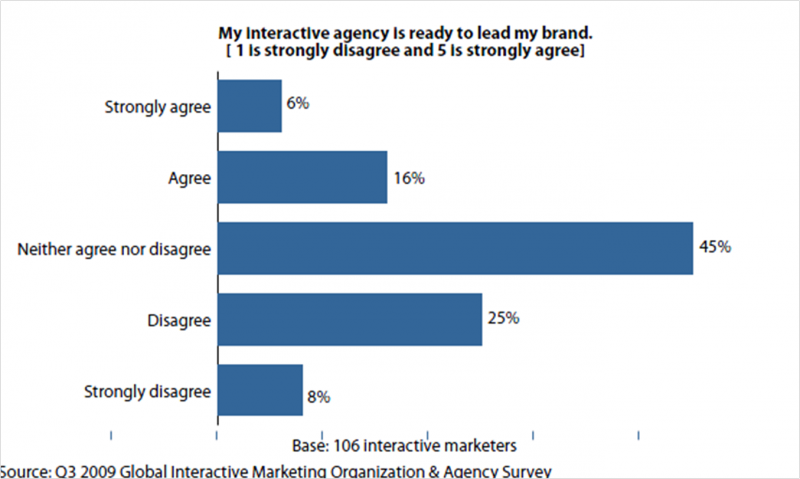 Until the agency world shakes itself out, interactive marketers should clearly definte the roles of their agencies and look to the agency's heritage to identify their core strengths. This is especially true in social media, which is more of a horizontal than a vertical within an organization. While many agencies claim they are experts in the space, in most cases they are experts in their specialty area. The reality is marketers should own their social media strategy since it is about creating direct conversations with consumers, with agencies playing a supporting role helping develop strategy, identify influentials, build out communities and infrastructure and help with analytics (to name a few).