Many product strategists are, like me, old enough to remember software stores like Egghead. Those days are gone. Today, consumer packaged software represents a very limited market – the software aisle has shrunk, like the half-empty one at the Best Buy in Cambridge, MA (pictured). 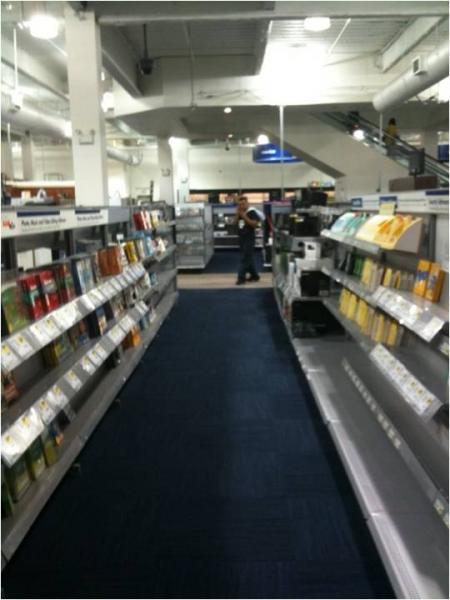 Only a few packaged software categories still exist: Games. Utilities and security software. And Microsoft Office – which constitutes a category unto itself. Some 67% of US online consumers regularly use Office at home, according to Forrester’s Consumer Technographics PC And Gaming Online Survey, Q4 2009 (US). Office is the most ubiquitous – and therefore successful – consumer client program aside from Windows OS.

Office 2010, Microsoft’s latest release, will continue to succeed with consumers. On the shoulders of Office 2010 rests nothing less than the defense of packaged software in general. It’s also the most tangible example of Microsoft’s Software Plus Services approach to the cloud – a term that Microsoft seems to be de-emphasizing lately, but which captures the essence of the Office 2010 business goal:

To sell packaged client software and offer Web-based services to augment the experience.

Office 2010 includes a number of improvements in usability, new features like Sparklines and Social Connector, and its perhaps most noteworthy new feature, Office Web Apps. Office Web Apps are designed explicitly to help consumers leverage the power of “the cloud” (a term consumers don’t use) while also not cannibalizing sales of the client program. Invariably, some reviews will compare Google Docs and Office Web Apps head to head as if they were meant to be comparable offerings. This is a mistake. Office Web Apps are a complement to the client program, more of a feature than a standalone competitor to Google Docs.

In some ways, the Office versus Google Docs debate doesn’t merit a lot of consideration – it’s still no competition. In terms of usage and penetration, Google Docs remains a failure – so far, anyway. Only 4% of US online consumers say they regularly use Google Docs, according to Forrester’s Consumer Technographics PC And Gaming Online Survey Q4 2009 (US). Let’s think about that for a second: We’re talking about a free software-as-a-service offering from one of the top brand names in technology. The offering has been available for over three years from Google (and two more years if you count Writely before Google purchased Upstartle). And yet only 4% of consumers are onboard. Why is this the case?

What does this all mean? That many consumers would rather purchase or pirate Office than use free Google Docs.

Office 2010 will continue this success in the consumer market. It’s one of a dwindling breed of heavy client programs (outside of gaming), but it’s got numerous advantages:

What do you think? Will Office 2010 continue the success of Office software in the consumer market?

AIOps: The Riddle Wrapped In The Mystery Inside The Enigma

Carlos Casanova 19 hours ago
It didn’t take long into my tenure with Forrester to realize that there was confusion in the industry regarding AIOps. I touched on this in my “meet your new analyst” blog. Both technology vendors and industry companies openly asked me what the term meant, because they are hearing many variations. They gave me examples of […]
Read More
Blog