Online personal finance pioneer Wesabe.com today announced it would be exiting the account aggregation and online personal financial management (PFM) space. While the unexpected home page announcement caught users by surprise, the site had for some time been struggling to build a larger user base in the face of better funded competitors and bank-hosted offerings from Yodlee, Intuit, and others.  Wesabe had launched its own white-labeled PFM solution for banks last year, but Springboard, as it was known, failed to attract much interest.

Wesabe is not shutting it doors entirely. It will continue to run the community, or Groups, part of its web site, where it had attracted a loyal and very active group of participants. Wesabe had also begun licensing its Groups content to other institutions in 2009. This “community –in-a-can” concept allowed institutions to quickly add a social component to their sites without having to build it from the ground up.  Addison Avenue Federal Credit Union last summer began offering the Groups functionality on its site. 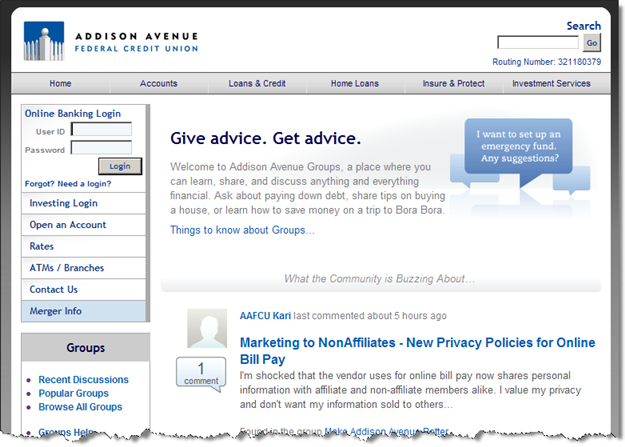 Company CEO Marc Hedlund noted on Wesabe’s home page today that “competitors have either dismissed the value of community, or have not been able to create a community as rich as Wesabe Groups, so I'm very happy we are able to keep that part of the service going.” Wesabe is getting assistance on that front from one of its current Groups customers.

The failure of such a high-profile provider such as Wesabe is bound to raise questions about the viability of third-party sites offering PFM functionality direct to consumers. With Mint.com’s acquisition last year by Intuit, it now has the financial backing to remain viable in the face of an onslaught of bank-hosted PFM offerings currently in the works, including those leveraging Intuit’s own solution for banks, FinanceWorks.

With most banks looking at tightly integrating these tools into their overall online banking experiences — giving customers a clearer picture of their overall spending, bill payments, transfers, and more – the value of standalone solutions, whether they be online (Mint), packaged (Quicken), or mobile (iExpensIt), continues to shrink.

Diego Lo Giudice 16 hours ago
Truly digital firms have business models with technology at the core, and this technology is software. For such firms, software is an expression of the business. To become truly digital, complementary approaches to people, process, and technology are needed. The unresolved need for more developers (people) is well and painfully understood. The need for agile […]
Read More
Blog