Similar to the past few years at this time of year, we are in the process of preparing a global banking platform deals report for 2010. As we have done since 2005 to help application delivery teams make informed decisions, we will analyze deals’ structure, determine countable new named deals, and look at extended business as well as key functional areas and hosted deals — all to identify the level of global and regional success as well as functional hot spots for a large number of banking platform vendors.

In the past, some vendors told us that they are not particularly fond of us counting new named deals while only mentioning extended business, renewed licenses, and the like. Why do we do this, and what is the background for this approach? First, extended business as often represents good existing relationships between vendors and banks as it represents product capabilities themselves. Second, we have asked for average deals sizes and license fees for years, but only a minority of vendors typically discloses this information. Thus, we do not have a broad basis for dollar or euro market shares — and I personally shy away from playing the banking platform revenue estimates game.

An Alternative Counting Model Could Be Implemented Easily . . .

Consequently, available data makes counting new named deals the only feasible way to represent an extending or shrinking footprint in the off-the-shelf banking platform market — and thus to also represent customer decisions in favor of one banking platform or the other. Some vendors suggested introducing weights for the size of the bank and the relevance of the seven world regions (for example, North America and Asia Pacific). We could easily do so, but there are problems with this approach: 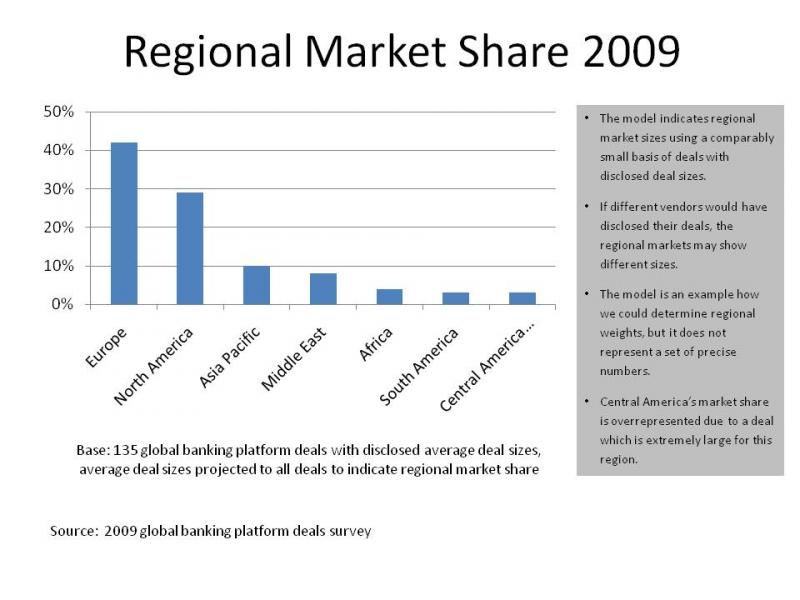 . . . But It Would Neither Provide Additional Value Nor Increase Transparency

The bottom line: This survey’s goal and purpose is to support decision-making in financial services firms by representing vendors’ level of global success, functional hot spots, global delivery capability, and country-specific experience in an unbiased and transparent way. Introducing artificial and in some business situations potentially biased weights would not increase transparency and in many instances would reduce the reliability of the deal information. Based on the data that we typically have available, counting new named deals is the best way that we can think of right now to support decision-making — supplemented by a look at the seven individual regions, delivered functionality, and examples of countries and banks. Using this information, banks can identify vendors with clients in a region or country of interest, typically serving smaller and/or larger banks or with more a global client base in a huge number of counties. I am glad to discuss more-detailed perspectives with our clients.

That said: I would be happy to learn about your thoughts on how to represent the global success and regional relevance of global banking platform vendors. Please respond to this blog post or drop me an email: JHoppermann@forrester.com.