And with the new year, we're implementing a change. In the past months the Data Digest was always based on Forrester's global Consumer Technographics® data. From now on, once a month we'll highlight data from Forrester Forrsights for Business Technology (formerly named Business Data Services).*

In the past year we've looked a number of times at consumers' mobile Internet behaviors and attitudes. But how do enterprises feel about mobile Internet? And which operating systems do they support. My colleague Michele Pelino recently published a report called 'Managing Mobile Complexity' covering these — and many other — questions.

From an enterprise perspective, BlackBerry (RIM) tops the list big time — seven out of 10 enterprises in the US and Europe support this operating system — followed by Microsoft Windows and the Apple iPhone. 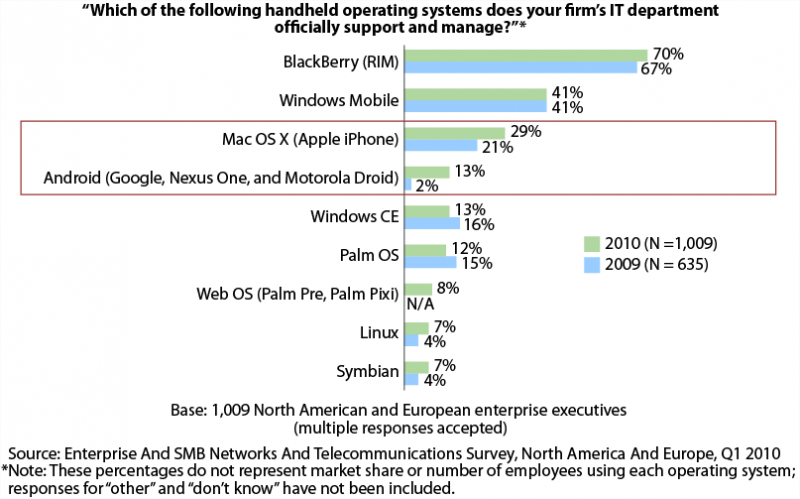 But it is important to recognize how quickly enterprise support of new types of mobile device operating systems, particularly those used in Apple iPhones and Android smartphones, has risen in the past year. For example, in 2010, approximately 30% of surveyed enterprises officially support and manage Apple iPhone devices, up from 21% in 2009. We have seen an even larger year-over-year jump in the percentage of enterprises supporting Android devices from Google, Motorola's Droid, Sprint's HTC EVO 4G, and others.

___________________
*Forrsights leverages buyer data to enhance the understanding of IT and business priorities and the role of empowered employees in influencing technology adoption. Forrsights surveys more than 20,000 IT decision-makers, line-of-business professionals, and information workers from Australia, Brazil, Canada, China, France, Germany, India, Japan, Mexico, New Zealand, Russia, UK, and US.

Boris Evelson January 5, 2023
Learn the the two most significant trends that Forrester has been observing in the data and analytics space and what their implications are for your tech organization.
Read More
Blog

Carlos Casanova December 19, 2022
The Forrester Wave™: Artificial Intelligence For IT Operations, Q4 2022 evaluated 11 vendors on 35 different capabilities. Read the report to see the vendor that came out on top with the highest-ranked capabilities for the broadest set of organizations.
Read More