Skip to content
< Blogs
Home > Featured Blogs > Is Anyone In The UK Actually Using QR Codes?

Intrigued by a lot of what I’ve been reading recently, I’ve started looking for evidence of QR codes transforming how shoppers are interacting with retailers. The thing is all the evidence I see with my own eyes doesn’t back up this proclaimed uptake. I’ve never noticed a single one in a shop. Now, that could be because I’ve not been looking and if I’m honest, I’ve only had a phone capable of reading them for a few months.

In order to give this mini research project some vague semblance of credibility, I have adopted the rigorous scientific approach that Mr. Featonby, my A-level physics teacher drilled into me many years ago . . .

My hypothesis is that retailers aren’t using QR codes in the UK, and furthermore, the average shopper hasn’t a clue what one is.

Section 2: I examined multiple copies of the Metro, the Independent, East Midlands Trains free magazine and any signage at St Pancras and Nottingham stations, and on the Piccadilly line. I’ve also been on the lookout on my normal shopping trips at Sainsbury's, Asda, and any other stores I’ve been in recently.

Results: I found a single QR code in the back of a Nottingham taxi, which linked to a site where you could rate the experience. Go Nottingham City Council!

Section 3: I was slightly surprised by the response on Facebook, but I suppose I do have a reasonably tech-savvy community of friends. Thirty-six people responded. Twelve of them honestly said they had no idea what it was. The majority of people recognized it as a link to online content though in a variety of contexts including inventory control, advertising, and travel tickets. Seven people had actually used one, but at least two of those people I counted because they said they’d scanned the code I posted. But only two had seen them in the context of shopping.

One person had seen an ad campaign in Oxfam where shoppers could scan the code to find out the provenance of the clothes they were buying, and the other used them regularly at Subway as part of their mobile loyalty scheme. 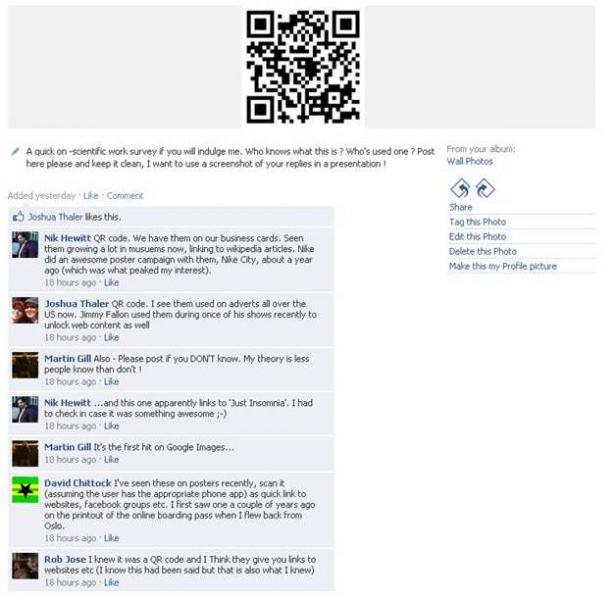 OK – a sample size of 36 isn’t statistically significant, but the bit that surprised me was that two-thirds of the people I asked knew roughly what QR codes are and what to do with them.

So short of a couple of anecdotal examples, I’ve struggled to find any significant evidence of QR codes integrated into the average shopping journey. I honestly expected to personally find at least some examples of marketing material linking print to websites. I hoped to find some mobile voucher codes, and I was doubtful whether I’d find any links to product info or in-store offers. Based on the feedback from my “Survey,” people recognize them and will use them — if they can find them!

My long-term view here is that QR codes are simply a stepping stone until something better comes along. I think that something better will be NFC, as at the moment the actual experience of having to download a QR reader, take a photo of a code and then find a website isn’t great. The idea that you can “wave” your phone over a product and start interacting with it is much more compelling.

However, QR codes do offer a real way of allowing customers a reach beyond the physical confines of the store right now — a way of delivering offers, rich product information like video, and an interactive and engaging product experience directly to the growing number of smartphones in circulation today.

I’m amazed that the adoption seems so low.

Michael O'Grady 7 hours ago
In 2023, we anticipate that two-thirds of global B2C e-commerce will come from online marketplaces.
Read More
Blog