As the election year approaches, we can bet that the cries to impose tax on online retailers will get even more pronounced as politicians look for ways to close our budget deficit and make villains of small but seemingly rich segments that can afford to bear the burden (e.g., private jet owners, Amazon.com). While some journalists are framing companies like Amazon as enabling tax shirkers at the expense of impoverished local school districts, the reality is, the debate is really about big box retailers and physical stores fighting to stop the wallet share war that companies like Amazon are winning online. The NRF has been one of the biggest proponents of making web merchants collect taxes, and it's not surprising that its board is composed of many of the country's largest retailers. Some critical facts:

So why is Amazon fighting this so hard and firing affiliates left and right whenever a state implements an online sales tax law?  Who wouldn't? The status quo works for them and for their customers.  While the data below suggests that a quarter of Amazon's customers may try to find somewhere else to shop if online sales tax were imposed, the real number would likely be far smaller because Amazon still wins on price and generally offers cheap/free shipping.  The bigger issue I suspect for Amazon is that it will have to adjust its pricing algorithms, which will probably bring its margins down a bit.

The reality, though, is that online sales tax won’t stem our trillions in debt and it won’t save the big boxes, which are on a slow and steady slide down. But it will hurt online shoppers, catalog retailers, and small pure plays and entrepreneurs who are trying to create a viable alternative to the big boxes. Amazon is easy to pick on because it has done a horrible job framing the debate. Its position makes it seem like it's saying "We want to keep our unfair advantage," whereas its perspective would probably be more palatable if  it were positioned as facilitating consumers choosing small businesses to patronize. I don’t advocate anyone evading taxes, but let’s call it like it is and realize who are the biggest voices crying foul on this tax issue: the very big boxes and chain retailers that killed small local businesses. They are now whining that they have competition because of a quirk (a legal one, mind you) in our tax system. I never thought I'd live to see the day that Walmart would be positioned as an underdog. 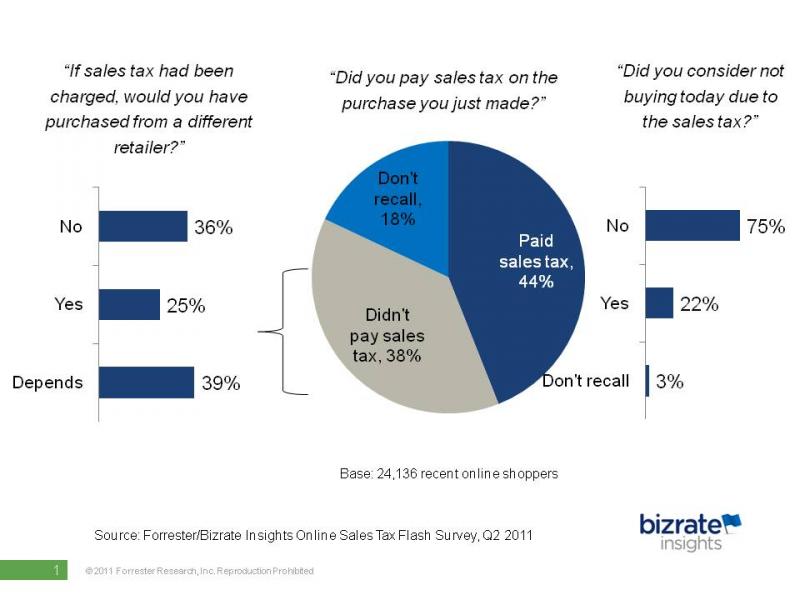