I was thrilled to be back in São Paulo last week visiting with different companies in the eCommerce space. I met with over a half dozen online retailers, as well as other players in the industry including payment providers and market entry specialists. It was also great to have the opportunity to speak at Rakuten’s event on April 24th announcing their official launch in the country.

Below are a handful of takeaways from the trip:

Online momentum is building in categories such as apparel and beauty. In markets like the US and the UK, apparel represents a significant percentage of total online sales. In Brazil, by contrast, this category is just starting to take off, with online sales currently representing a very small percentage of the total market. As issues such as inconsistent sizing are increasingly addressed, however, and new entrants boost the market, the online apparel sector is set to grow substantially. Likewise, there’s much talk of growing beauty sales in Brazil (the country is set to surpass Japan to become the world’s second largest beauty market) – as with apparel, online beauty sales are a tiny fraction of the total today, suggesting substantial growth opportunities going forward.

Retailers are bullish on social commerce, but eyeing different approaches. While a growing number of retailers are rolling out Facebook stores in Brazil, some are looking to alternative options to move beyond the standard offering. Magazine Luiza, for example, launched its Magazine Você offering last summer, which enables its customers to create individual stores within Facebook and earn commissions off the sales. Retailers overall remain bullish on the opportunities for social commerce – however, given that the eCommerce executives I met were all highly aware of developments in the US, many had tempered expectations of potential  Facebook store revenues following the experiences of some of their US counterparts.

Certain website functionalities are nascent. While online retailers are becoming increasingly sophisticated, funtionalities like product recommendations and ratings and reviews are still largely at an early stage in Brazil. A number of retailers indicated they planned to invest in more advanced recommendations, yet few retailers cited ratings and reviews as a core area of investment just yet. A couple of different retailers indicated it was particularly challenging to get consumers to post valuable feedback in Brazil, suggesting a certain reluctance among Brazilian consumers today to write lengthy, critical reviews of products or services.

Homegrown eCommerce platforms remain popular. Several online retailers I spoke with had elected to build their own eCommerce platforms, citing the more limited number of eCommerce solutions available in Brazil than in the US and Europe. Oracle/ATG and IBM WebSphere are well known at the high end of the market, while Rakuten's Ikeda and VTEX (both local eCommerce solutions) came up frequently in conversations as two Brazil-specific options with a number of smaller and midsized online retailers on their client rosters. And although many of our clients have asked if a “GSI equivalent” exists in Brazil, I did not hear of companies providing a comparable full-service solution.

The topics above are just a few of those discussed during the course of the week – others that came up regularly in conversations included the opportunities for mobile commerce, the challenges associated with the logistics infrastructure in Brazil, and payments issues specific to the country.

I’m glad to dive into any of these issues in greater detail with clients – I’ll also be talking about some of these trends during my presentation at eTail Latin America next week. And if you’re a company in the eCommerce space in Brazil that I wasn’t able to meet with this past week, I’d love to schedule a briefing to hear more.

Below: A demonstration of PagSeguro's NFC app at the UOL offices. 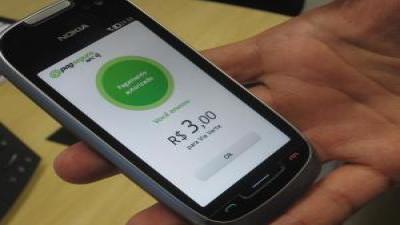 Michael O'Grady 2 days ago
In 2023, we anticipate that two-thirds of global B2C e-commerce will come from online marketplaces.
Read More