The year 2012 brought a significant amount of growth in enterprise use of cloud services but did it fulfill our expectations? With just five weeks left in the year, it’s time to reflect on our predictions for this market in 2012. Back in November 2011 we said that the cloud market was entering a period of rebellion, defiance, exploration, and growth, not unlike the awkward teenage years of a person’s life. The market certainly showed signs of teen-like behavior in 2012, but many of the changes we foresaw, it appears, will take several years to play out.

As often happens in our teenage years, what we want to be when we grow up changes with the winds and whims of the market. As reported in the latest Cloud Playbook future look report by John Rymer and me, we saw this affect market segmentation in 2012 as Microsoft and Google came to the realization that platform-as-a-service (PaaS) might have diminishing value when offered standalone. Both companies added infrastructure-as-a-service (IaaS) beneath their flagship offerings reflecting customer feedback we saw in our Forrester Cloud Developer Survey (see Figure 1). Enterprise developers don’t want closed systems or to be shielded from the configuration of the middleware platform – at least not fully. The market seems more interested in an IaaS-plus model where an IaaS platform is the foundation and is complemented by a series of cloud services that grant abstractions when and where wanted, letting the developer choose which is right for their project. 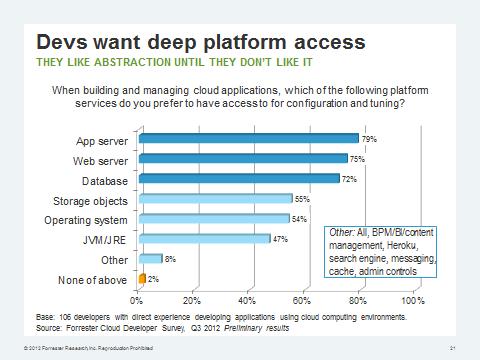 Does this shift to IaaS-plus mean the death of the PaaS market? That’s not a prediction we made in 2011; there is legitimate value there, at least for now. But looking at what we did predict for 2012, let’s score those prognostications:

1. Shadow IT enters the light – deal with it. Correct.This prediction bore out across the enterprise spectrum as I&O clients admitted they have stopped denying this trend and instead acknowledged that business units were bringing in even more cloud services and they would have to deal with this directly. Our Forrsights Hardware Survey showed a significant increase in enterprises saying they were establishing formal cloud management strategies. Sadly little tangible progress was in evidence that actual cloud management shifted to I&O departments. Earlier this year, we recommended as a first step that enterprises publish formal cloud policies, and less than 20% have done so.

2. The uncool attempting to be cool – not cool. Wrong, sadly. Stop the madness already! We predicted that as the understanding about what makes a cloud service different from traditional IT proliferated (and it has), we would see a comparable decline in cloudwashing. Sadly it only got worse. Kudos to the many high-tech vendors who stopped doing this, but shame on the enterprise I&O teams who made it worse. A virtualized infrastructure is NOT a cloud, folks. And you can’t tell your developers it is and think that’s good enough. When we say clouds offer self-service, we don’t mean self-service to the help desk or to the I&O team – you have to give autonomy to your developers.

3. A risky idea lands a big fish in jail. Wrong, thankfully. It’s every parent’s worst nightmare. Their rebellious teen pushes the limits and crosses the line. In IT such actions can affect not only the developer who takes the action but the whole company as well. Our Forrester Cloud Developer Survey found that enterprises put a lot of applications into production on clouds in 2012 and about 20% used company intellectual property, customer records and other data subject to compliancy (see Figure 2), but thankfully 2012 didn’t see legal action from these moves. That doesn’t mean we’re out of the woods, however. The fact that our survey showed such high use of this data on public clouds should be a wakeup call to the CISO and to I&O to get involved.

Figure 2 – Yes, Developers Are Putting Critical Data in the Cloud 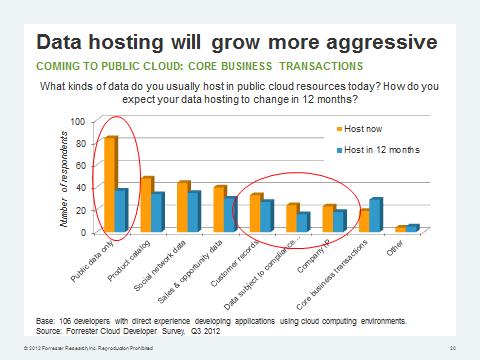 4. Conservative leaders ban the cloud as unhealthy. Wrong, thankfully. Honestly, the rebel in me was hoping this one happened. The climate was right for it with the ongoing global recession making many governments think protectionist thoughts and the US Republican Party retreating to its most conservative core. But the desire to keep a free market free in hopes of fueling the recovery won out. Both the EU and China had opportunities in 2012 to lay down such laws, but both softened their stances instead. There’s still time for this prediction to come true, though, as cloud privacy remains a murky territory.

5. The channel will face the music – reselling isn’t good enough anymore. Correct, but still a work in progress. This one feels somewhat like a broken record because we keep having to fight this battle. We at least seem to have established in the minds of the VAR and SI community that cloud services don’t need them for customer reach. But they do need them for customer influence. Enterprises are still wrestling with the uneven handshake of cloud consumption and honestly don’t want to take the extra steps required to configure, integrate, monitor, and supplement cloud services to match their internal expectations. This is where the channel value resides today, but you need new skills to do this right. We applaud the moves by Tata Consulting Services and Wipro, which have created legitimate cloud brokerage services including developer self-service and SSO through their hosted cloud portals. Arrow and IngramMicro are helping channel partners with at least centralized buying and support capabilities. Many other channel partners are taking similar approaches. But, sadly, most channels are still hoping for revenues the old fashioned way.

6. Cloud cred will matter. Correct, but still a work in progress. The good news: Claiming cloud experience on your resume is no longer good enough. The bad news: Cloud certifications and training were slower to emerge than needed. HP, EMC, Rackspace, and others stepped in to fill the void in 2012, but most universities, industry associations, and private training companies stayed on the sidelines. Kudos to Rackspace, which is now certifying third-party training companies around its cloud admin training program, but we need to see significant improvement here. It’s time for Amazon.com, salesforce.com, Google, and Microsoft to step in.

7. Cloud battles will showcase talent and advance best practices. Wrong. If you can’t claim your cloud experience with a certification, the fall back is showing off your wares directly. Our Forrester Cloud Developer Survey confirmed that nearly 90% of cloud developers maintain a personal account on their clouds of choice separate from the corporate account (see Figure 3), but this fact wasn’t exploited by any of the leading cloud conferences for meaningful hackathons or similar showcases. Opportunity missed. Who doesn’t want to be crowned the baddest cloud developer in the land? Will such a contest emerge at this week’s AWS Re:Invent Conference? 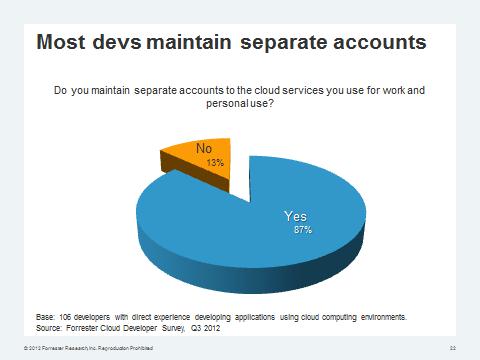 8. Monkeys will go legit. Correct. Netflix did more in 2012 for educating developers about what it really takes to build and manage resilient apps in the cloud than any other member of the community by open sourcing its entire collection of code monkeys and its own provisioning and load-balancing tools. While such tools haven’t been cemented as standard development practices, you can hardly call these chaos generators a fringe development tool any longer. Have you unleashed them into your cloud deployment yet? Try it today.

9. Your company will survive a major cloud outage. Correct? You tell me. Certainly if we use the 2012 cloud outages at salesforce.com, AWS, and Azure as measures, I’d argue a lot more of you survived than would have in 2011. For three years now we have been preaching that application resiliency in the cloud isn’t determined by the cloud provider but by the application owner. Each major cloud outage serves as a chance for you to test your configuration resiliency, and far fewer firms reported outages in 2012. Performance suffered in many cases but survivability is proven.

10. You will finally have to budget for public cloud spend. Correct? Again, I put this to you, the reader, to answer this one. Certainly among Forrester clients we found a significant increase in formal funding for cloud consumption. One positive sign here was the degree of AWS customers who bought into its Reserve Instances discount program. Cloud cost monitoring vendor Cloudyn reported in Q4 that 48% of its clients made this commitment in 2012. That’s at least a 12-month budgeting of cloud consumption, which is clearly a shift from credit card buying to the formal purchase order.

What will next year bring? Check back next week for Forrester’s 2013 cloud predictions.