Winning teams delight in the 'doing', not the 'winning'
When I was growing up in Pittsburgh, Pennsylvania, Chuck Noll was the head coach of the Pittsburgh Steelers, and his leadership was my first glimpse into what separates teams that win from teams that don't. My favorite quote from Noll exemplifies his view both simply and eloquently: "The thrill isn't in the winning, it's in the doing." What Noll taught his players, including Terry Bradshaw, 'Mean Joe' Green, and Franco Harris, is how to delight in the joy of doing, over the joy of winning. Why? Because the 'winning' won't come unless your passion comes from the 'doing'!

This is why I'm so excited about the explosive trend of BYOD and consumerization of IT on so many levels, from cloud computing to tablets. Workers are putting the joy back into the 'doing' parts of their jobs by exploring different ways of working, and using technologies that often exceed what even the best IT organizations can generally provide. It's also why I think we'll see a rebound of Hosted Virtual Desktops (also known as VDI) through 2013 and beyond. But first, let's look at the data:
IT interest in VDI appears to be on a downward trend
Forrester's annual survey of IT decision-makers revealed a drop in interest and plans for VDI initiatives from 2011 to 2012: 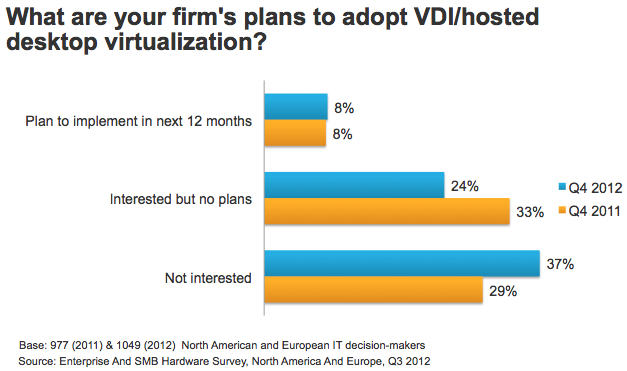 But a shift in the IT drivers for VDI suggests it could actually be an inflection point
There was also a subtle but very important shift in the reasons why those who are interested are…well…interested in VDI. We didn't ask about supporting employees' ability to work from anywhere in 2011, but when we introduced the option for 2012, it took the top spot at the expense of some of the traditional reasons. Meanwhile, enabling Macs and BYOPC programs both increased significantly: 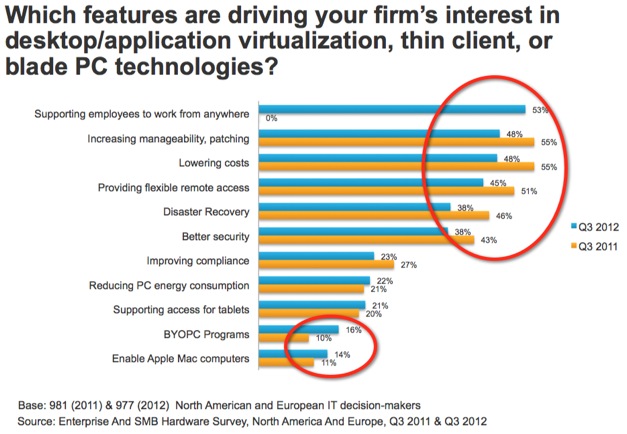 While 3-year trends on IT consumerization and BYOD strengthen the case
This correlates well with our Workforce Employee Survey data analysis, where we can see the growth of employee spending on computers (not just tablets) to do their jobs over a 3-year time horizon:
Survey question: What is your level of interest in being allowed to bring your own PC as your work PC of any type, desktop or laptop? (Employees who answered they would be willing to pay for some or all of the cost to get the device of their choice):

Source: Source: Forrsights Workforce Employee Survey, Q4 2012, Q4 2011, Q4 2012. Sample size = 3284 (2012)
VDI didn't really start coming of age until 2009, but the drivers then were cost and efficiency
When we look at these results in the context of Google Trends data, we can see the long ramp-down of traditional thin client PC technologies, and by extension shared server-based computing in general. Beginning in 2009 – about the time firms were beginning to plan for Windows 7 and both Citrix and VMware were announcing major new VDI platforms and technologies, we can see the rise of VDI, followed by a slight decline.

Source: Google Trends (trends.google.com), March 31, 2013
Now it's about employee flexibility
But here's the interesting thing to me: Both of the Forrester surveys above show an underlying change. First the Workforce Employee Survey shows rapid growth in employee willingness to spend their own money on devices (and many did). Second, we see a lagging indicator of IT shifting the reasons why they're interested in client virtualization technology. It's no longer about cost and efficiency, it's about employee workstyle flexibility!
VDI costs more, but you're getting something for your money
In our research on the relative cost of operations for VDI vs. physical PCs, we found higher operational costs for VDI – especially for knowledge workers. Why? Because to understand the cost of VDI, you have to analyze the backend costs too. And, the employee is usually getting less of a lot of things they care about, like the ability to install software, less storage, less portability, etc.
So when does VDI make sense?
VDI makes sense when it gets IT out of the business of worrying about employee-owned devices. It makes sense when it's one of several ways that IT can provide remote access to systems of record from untrusted or employee-owned devices. It makes sense when workers can do things they could't do any other way. Advanced, collaborative engineering and design is a great example. Firms like Peugeot-Citroen and Applied Materials are using VDI to scale their engineering systems to global teams. Engineering files and databases are becoming so large, it's no longer practical to carry them around on a laptop, and VDI actually provides much better portability of the experience. Virtual GPU innovations from NVIDIA are accelerating these graphics-rich experiences for VDI environments, where the rendering used to be done with the CPU alone.
The future looks bright for Desktops-as-a-Service (DaaS)
The number one barrier to client virtualization adoption is a lack of internal resources and skills. Also high on the list is immaturity of the technologies. However, as we see with other cloud and SaaS technologies, these concerns can go away when a provider has the expertise and infrastructure already, and the service is easy to consume and affordable. DaaS providers like Desktone, tuCloud and dinCloud have considerable experience and maturing infrastructures. Citrix is delivering DaaS-ready infrastructures for providers, which will help rev up the market.
More on all of these topics in upcoming blogs and research. With my friend and colleague J.P. Gownder now joining Christian Kane, Michele Pelino, Christopher Voce and me on the Workforce Enablement Playbook team, I'll be focusing a lot more on my passion for client virtualization, and on helping I&O professionals apply it wisely to bring back employees' zest for 'doing' through engaging experiences. Employees who can enjoy what they're doing because the experience is right are the lifeblood of companies who win!