These poor, cold fellows stand few miles from my parent’s house in the Highlands of Scotland. 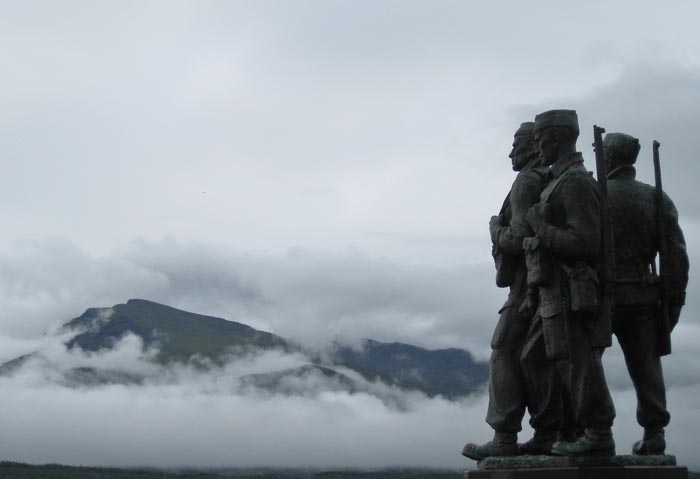 They commemorate the founding of the Royal Marine Commandos in 1942, and these windswept, bronze statues (almost as cold as the poor trainees were at the time) overlook the glens and lochs where the original commandos trained.

So what’s significant about the commandos in the context of eBusiness? Well, it isn’t that they were uber-cool special forces dudes. It isn’t even that they were pioneers of irregular warfare (i.e. innovators). The concept of Commandos pre-dated World War 2. In fact, in commanding the foundation of the commando units, Sir Winston Churchill took inspiration from his experiences in the Boer War and looked to the raiding tactics of the Boers for a model. So it's not even like us Brits invented the term.

What’s important about the commandos is that they were cross-functional. They were expert at collaborating across organizational boundaries. And in this they were pioneers.

Traditionally, the Army, Royal Navy and RAF were silos. Massive, traditional, centuries old silos who went further than just having incompatible processes and disjointed command structures. In many cases there was outright rivalry between service arms of the kind that would be intolerable in business. Troops fighting in bars. Intelligence actively hoarded by officers. Functional rivalry like nothing you have to deal with in eBusiness (hopefully).

What set the Commandos apart was that their very concept was that of a “combined operation.” Army, Navy and Air Force operating together to perform one mission, organized around the task, and not the functional silos. This required a few basic operating principles that flew in the face of traditional military doctrine:

·         Command structure was placed alongside existing silos, not underneath one of them.

·         There was a clear and galvanizing mission and purpose.

·         They had the permission to second the resources they needed from other service arms.

·         They had to establish cross-functional ways of working that overruled existing processes.

A very similar list to the principles I uncovered in researching “Building an Agile Organization”. The lessons learned by the Commandos in the 1940s have permeated modern military doctrine and while many of the operational silos still exist in the forces today,leading military thinkers are making efforts to reinvent their doctrines to embed agility into their DNA. I don’t have the space to cover all of that here, but I’ll come back to it in future posts as I believe there are some interesting lessons for business executives in this military quest for agility.

What’s also interesting is that as I’m working with Nigel Fenwick form our CIO team researching the rise of the Chief Digital Officer and looking into building some keynote thoughts on becoming a fundamentally digital business for Forrester’s eBusiness Forum in November, I’m finding many of the same themes come to the fore. Cross-functional working galvanized around a core purpose – though in most business cases the customer, not a military objective!

So the next time you have to collaborate on a project or work across functional boundaries, spare a thought for those freezing cold, hungry, exhausted Commandos hunched down somewhere on the dark. If they could do it, then I reckon you can give it a go.

Zhi Ying Barry 1 day ago
There’s something about entering a new year. Unbridled optimism, renewed hopes, and general positivity about having a fresh start are typical emotions. But 2023 is not like any other year. The pandemic-fueled growth that many firms experienced in 2022 appears to have come to a halt as organizations enter 2023 facing the prospect of an […]
Read More
Blog