I get a lot of questions about the best way for developers to move to the cloud. That’s a good thing, because trying to forklift your existing applications as is isn’t a recipe for success. Building elastic applications requires a focus on statelessness, atomicity, idempotence, and parallelism — qualities that are not often built into traditional “scale-up” applications. But I also get questions that I think are a bit beside the point, like “Which is better: infrastructure-as-a-service (IaaS) or platform-as-a-service (PaaS)?” My answer: "It depends on what you’re trying to accomplish, your teams’ skills, and how you like to consume software from ISVs.” That first question is often followed up by a second: “Who’s the leader in the public cloud space?” It’s like asking, “Who's the leading car maker?” There’s a volume answer and there’s a performance answer. It’s one answer if you like pickups, and it’s a different answer if you want an EV. You have to look at your individual needs and match the capabilities of the car and its “ilities” to those needs. That’s how I think we’re starting to see developer adoption of cloud services evolve, based around the capabilities of individual services — not the *aaS taxonomy that we pundits and vendors apply to what’s out there. This approach to service-based adoption is reflected in data from our Forrsights Developer Survey, Q1 2013, so I've chosen publish some of it today to illustrate the adoption differences we see from service to service.

First, a bit about the data below. We asked all developers in our survey about the types of application development technologies they’ve worked with in the past 24 months. Of the 1,611 North American and European developers we surveyed, 325 (just over 20%) indicated that they had worked with cloud computing or elastic applications. We then asked those developers a variety of questions about how they are using cloud/elastic technologies. It’s probably not a surprise that the three most common types of cloud services developers have adopted to this point are compute, storage, and relational data services (see Figure 1). Compute and storage are both regularly employed by 47% of the survey respondents, and RDBMs services are used by 36% of survey respondents. Other cloud-based services like development tools, messaging, caching, and No SQL DBMS trail these big three by a significant margin. 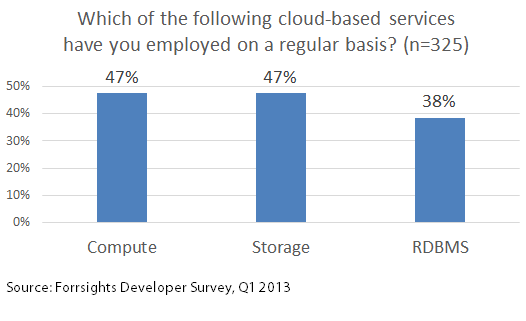 So what happens when we look at how leading public cloud providers fare among developers that employ each of these three types of services? Each adoption profile tells a slightly different story (see Figure 2): 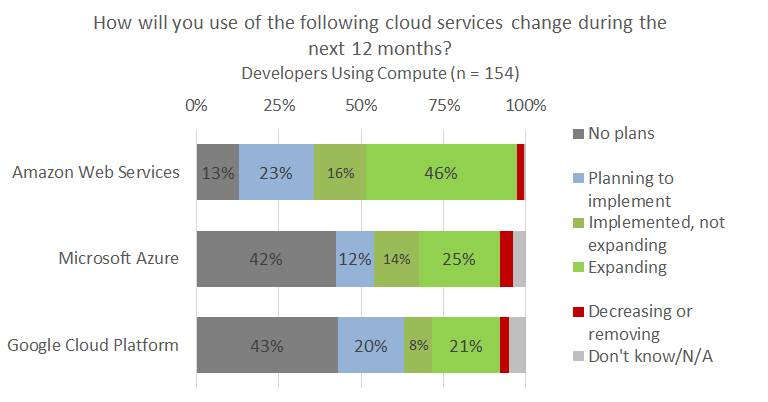 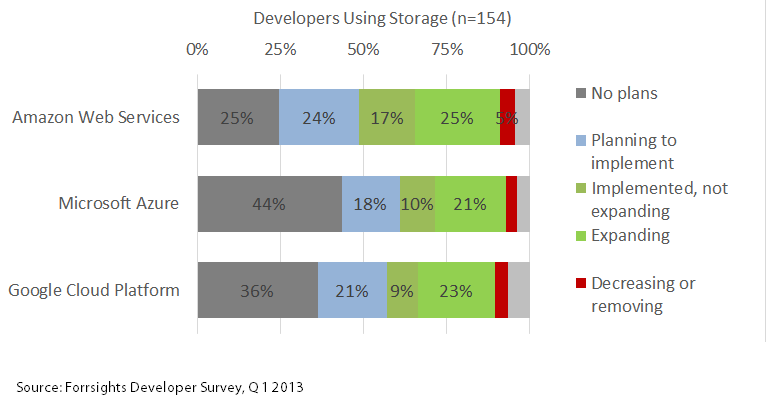 Looking at each of these three important cloud services shows different competitive forces at play within each service type, and that’s key to understanding how the cloud market is evolving. We’re moving away from distinct leaders in a single market segment, like IaaS or PaaS, and toward a model that mirrors a traditional buying pattern, where app development professionals choose between best of breed services (e.g., compute, storage, RDBMS, messaging, CRM) or integrated data-centers of services (AWS, Microsoft Azure, Google Cloud Platform, Salesforce/Heroku/Database.com). If you believe in best of breed today for your on-premises strategy, then it’s likely that it will make sense to look at adoption leaders in the cloud in a similar way — on a service-by-service basis. If you’d prefer to use one provider that has the best aggregate buffet of services, then who’s leading whom at the individual level will matter less.

Forrester clients should check out my developer landscape document and James Staten’s “Who Are Enterprise Cloud Developers?” for more detail on cloud adoption by developers. If you’re interested in other cloud providers not mentioned here, or other cloud workloads and how they compare against storage, compute, and RDBMS, then consider becoming a Forrsights Developer Survey client.

Biswajeet Mahapatra February 1, 2023
Indian enterprises have had software as a service (SaaS) on their radar for the last seven-plus years, if not more. SaaS uptake in India was slow, and cost used to be the only major driver toward SaaS adoption. Indian enterprises were in dilemma when major software vendors shelved their on-premises solutions in favor of SaaS-only […]
Read More
Blog

Diego Lo Giudice January 27, 2023
The missing piece in digital thinking today is low-code. Learn how low-code platforms and agile values, principles, and practices all fuel each other.
Read More