Consumer mobility in India and China is flowing into enterprises. Recent Forrester survey data shows that nearly three in five IT execs and technology decision-makers in these countries — 58% in India and 57% in China — plan to increase their spending on mobile software (including applications and middleware) in 2014.

India has leapfrogged Australia/New Zealand and now leads the Asia Pacific region in terms of expected mobile software spending growth. China has made the biggest move over the past year, jumping from eighth place to second. 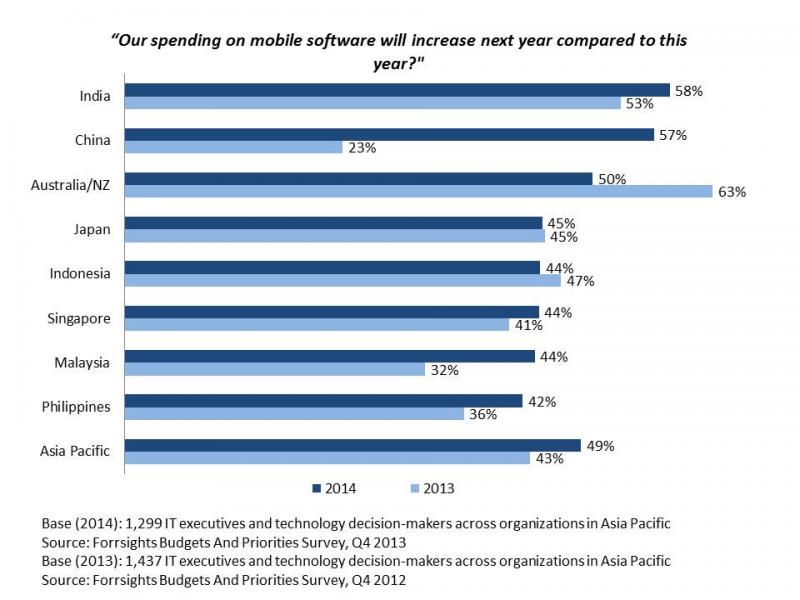 We believe that the high growth in mobile software spending in India and China is primarily due to:

As mobile devices increasingly empower individuals, it’s critical for I&O professionals, their CIOs, and relevant business leaders to develop context-aware mobile apps built on systems of engagement to seamlessly connect with employees, customers, and business partners. They can’t achieve this by building one-off apps, but must prepare an application development road map with user experience at its core. Those apps will help organizations achieve their strategic business objectives. Most organizations will need to shift their development approach from “PC-only” to “mobile first, then PC”.

Frederic Giron 2 days ago
Enterprise architecture (EA) is a strategic capability for many Forrester clients. It is essential that EA in all its permutations be results oriented, pragmatic, and practical to remain relevant. In Forrester’s Enterprise Architecture Award, we look for stories of EA excellence resulting in tangible business and customer results. The Forrester Outcome-Driven Architecture Model rests on a […]
Read More
Blog

Carlos Casanova September 12, 2022
We all see and experience things through the lens of prior travels and encounters. This is no different from the path you choose to move forward with your AIOps implementations. An outcome of our Now Tech: Artificial Intelligence For IT Operations, Q2 2022 report was confirmation that more vendors have entered the AIOps market. I […]
Read More