Amazon plans to launch a smartphone this fall, according to The Wall Street Journal (reported based on undisclosed sources in the SF and Seattle area who have seen the device).

Well, it depends on Amazon’s definition of success.

Is it about media? Amazon is still somewhat new to developing, building, distributing, and supporting hardware. If this device adds to its portfolio of PC, Kindle, and Fire TV to be yet another screen for Prime subscribers, that may be enough. The notion of subsidized hardware to support an extended media play is interesting. My colleague James McQuivey leads our research there.

Is it about commerce? mCommerce is a big deal in mobile, but not a big deal within the broader context of consumer spending. Offline commerce dwarfs eCommerce and eCommerce dwarfs mCommerce. The big opportunity in mobile is the influence of sales locally. But Amazon also plays in this space.

Is it about payments? I’d say unlikely in the near term, but I like the idea of using my Amazon account (linked to my credit card) for quick and easy online payments. However, it’s hard to imagine the same level of convenience translated into the physical world – with the greatest possibility in  mCommerce. My colleague Denee Carrington is our expert here.

2) Should you build on their platform?

Still to be determined, but likely not in the near term. We’ll see if Amazon launches a phone with a regular flavor of Android, or if they’ll debut their own special version closer to what they have on Kindle. The reality is though that most of your customers are on iOS or standard Android devices, with  iOS customers likely spending the most. And even while some have alluded to technology that will translate apps among platforms, there will be limitations. See the work of my colleagues Jeffrey Hammond and Michael Facemire.

3) Will consumers buy the phone? (and which carrier will offer it?)

According to the Wall Street Journal, there seem to be some cool features including four front-facing cameras that could be used for gesture control, for example. To be super cool, apps would have to use these hardware features. But if this is the only phone/hardware with four front facing cameras, it will be hard to entice developers.

Is commerce, media, and payments enough to entice consumers, assuming that other device features, service price points, etc. are on par. Consumers need more in the era of the mobile mind shift.They expect to get what they want in their immediate context and moment of need, and this certainly extends to social media, communication, and location or maps at a minimum. These plays have to be very strong on an Amazon phone because while use of media is high today among consumers, use of maps, social media and communication apps outpace commerce/payments. (See Trojan Horse of Mobile report). 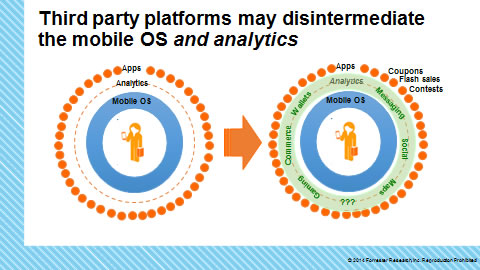 Conrad Mills 1 hour ago
B2B events have undergone the most profound change imaginable over the past three years. Marketers now need to manage a much more complex event landscape, planning and executing a range of events across in-person, virtual and hybrid formats. Selecting the right B2B event management technology provider is a critical part of this process, but one […]
Read More
Blog

Meng Liu 4 hours ago
Accounts receivable (AR), including invoice issuing and payment processing, is one of the core processes in a company’s financial operations. The rising adoption of e-invoices has spurred more firms to acquire AR automation software to support customer demand and respond to digital transformation. My recently published report, The AR Invoice Automation Landscape, Q1 2023, will […]
Read More