I've just released a major new report on Augmented Reality (AR) and Virtual Reality (VR), Augmented And Virtual Reality Should Be Part Of The Innovator's Toolkit. My research finds that it's time to give AR and VR their due consideration when solving business problems involving either workers or for customer interactions.

AR and VR technologies aren't new. Virtual reality first experienced a boom of interest in the early 1990s, spurred by the 1991 book Virtual Reality by Howard Rheingold. In 1995, Angelina Jolie starred in the movie Hackers, which introduced mass audiences to head-mounted VR display technology. But the early promise of the technology fell apart due to underperforming graphics, attention-jarring lag times, outlandish hardware requirements, and the lack of an application ecosystem. No VR market emerged (outside of niche categories like military usage) until Facebook acquired the Kickstarter startup Oculus for $2 billion in March, 2014.

But AR and VR are finally ready for primetime, a quarter-century after their initial boom. Oculus Rift has generated significant interest among both early adopter consumers (like gamers) and among enterprise buyers; companies like Lexus and Marriott have conducted trials of Oculus in which customers don the device to experience their products. HTC Vive (with Valve software) rivals Oculus in VR, with a sensor-laden device that has garnered rave reviews. On the AR spectrum, Microsoft's HoloLens is set to drive radical productivity gains in the workforce with its 3D, holographic imagery. Less sophisticated smart glasses from Epson and Atheer Labs bring AR to verticals like healthcare and manufacturing. The vendor landscape, which includes other players too, has become robust.

AR and VR form a continuum of functionality and experiences. They're part of one movement, though they can differ significantly in practice. Academics Paul Milgram and Fumio Kushino laid out the virtuality continuum in a research paper in 1994, and the framework still makes sense today. 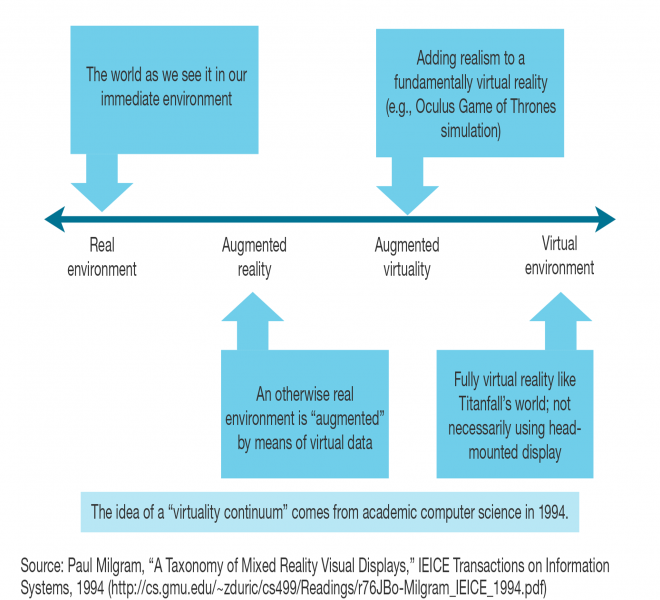 Where AR layers virtual data on top of the real world, VR brings life-like sensibilities to virtual worlds. Each has a bright future ahead of it; VR will be a powerful tool for training, for instance. But as we see with Oculus' recent product moves — introducing the Oculus Touch feature and acquiring Pebbles Interfaces last week — the company is trying to move the product in the direction of the AR pole of the virtuality continuum. This is because AR, ultimately, has the greatest potential for driving worker productivity and creating new customer experiences. As I argued in my report on HoloLens, AR can augment, and reshape, a wide array of existing workflows in the physical world — and can even compete with VR in scenarios like training.

Both AR and VR have bright futures ahead of them, though, and I&O leaders will want to consider both of them as part of their innovator's toolkits. I invite you to read and download the report in its entirety for deeper insights.

J. P. Gownder is a vice president and principal analyst serving Infrastructure & Operations Professionals. He has covered the tablet market since the debut of the iPad in 2010. Onalytica named him one of the five most important people on wearable computing for 2015. Follow him on Twitter at @jgownder