You might be on the fence about your wearable device, but how do you feel about that new toy your child is now playing with?

American youth love gadgets – and now, that includes wearables. While some technologies have a bigger impact on parents (like those intended to keep track of youngsters’ whereabouts), other wearables are helping kids accomplish the same results that adults seek from their own wearable devices: a healthier lifestyle, instant education, and pure entertainment.

Among early technophiles, the products are catching on: Forrester’s Consumer Technographics® survey data shows that 14% of US online youth (ages 12 to 17) currently use a wearable device – the most popular being a Fitbit, followed by the Apple Watch (in the US, nearly half of young mobile users own an Apple iPhone). And, as with many toys or fashions among adolescents, wearable preferences differ significantly by gender: 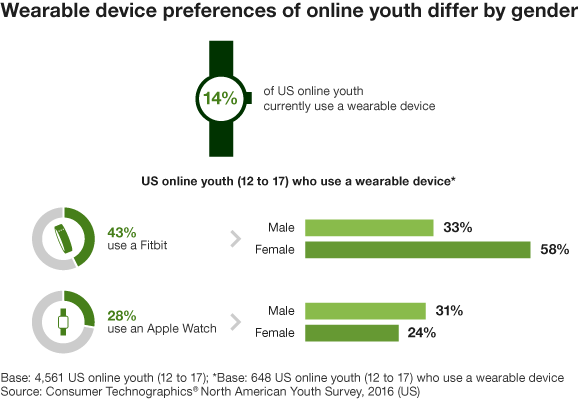 The children’s wearable technology adoption curve is being powered by cutting-edge startups like Fuhu, which recently launched the first collaborative fitness tracker — giving a whole new meaning to “mobile family plan.” But large companies are also taking an interest: Verizon launched a line of wrist-based cell phones for kids (complete with seamless calling, texting, emojis, GPS, and more) just in time for the 2015 holiday season.

In his recent report, my colleague J. P. Gownder states that “unlike previous technology revolutions like smartphones or tablets, wearables include a long tail of disparate product types . . . as a result, CMOs will find themselves surprised at the depth and breadth of wearable devices.”

You may be surprised at how easily (your) children are taking to wearable technology today, but, in J.P.’s words, “tomorrow’s parents will consider security-focused wearables as unremarkable as bicycle helmets are in the US, where they’re a commonplace protective measure.”

What does the rising generation’s device uptake mean for the future of consumer behavior? How fast will wearable sales grow, what kind of adoption trend can you expect, and why? My colleague Susan Wu and I will be exploring these questions during our webinar, “Wearables: A New Era Of Mobile Innovation?” on April 27. Forrester data clients can register here; if you are not a Forrester data client, please contact data@forrester.com.

Boris Evelson January 5, 2023
Learn the the two most significant trends that Forrester has been observing in the data and analytics space and what their implications are for your tech organization.
Read More
Blog

Carlos Casanova December 19, 2022
The Forrester Wave™: Artificial Intelligence For IT Operations, Q4 2022 evaluated 11 vendors on 35 different capabilities. Read the report to see the vendor that came out on top with the highest-ranked capabilities for the broadest set of organizations.
Read More