Skip to content
< Blogs
Home > Featured Blogs > Industry 5.0? No Thanks!

Industry 4.0 has been a big idea in manufacturing for the past decade or so, but moves are unfortunately afoot to prematurely crown a successor: Industry 5.0. While the ever-shorter refresh cycles for smartphones have apparently become an unfortunate fact of consumerist life, industrial revolutions really should come along with a lot less frequency! 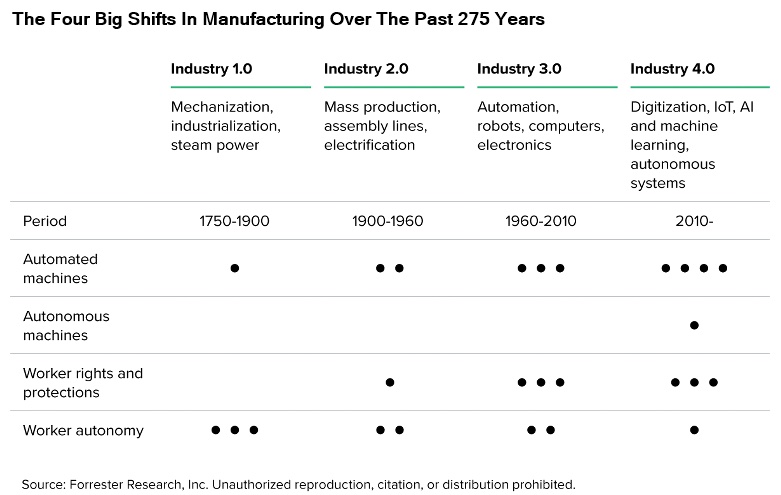 Industry 4.0 was born in Germany over a decade ago, first gaining broader attention at the Hannover Messe trade fair in 2011. Industry 4.0 (or the Fourth Industrial Revolution) is said to follow three earlier leaps in manufacturing technology, beginning with James Watt’s steam engine and the (first) Industrial Revolution that it unleashed back in the eighteenth century. My academic background in archaeology leads me to squirm uncomfortably at this, as I would argue that a lot of earlier innovations were also pretty revolutionary. Controlling fire, anyone? The harnessing of water power? The domestication of animals and crops that allowed early people to settle down and — eventually — specialise in things like making stuff? The deliberate smelting of copper, and then bronze, and then iron, and then steel? All sadly ignored in the neat narrative which says that “industry” was first “revolutionised” by Watt building steam-powered machines on the grounds of a big country house outside Edinburgh.

It may be too late to change the numbers by which we refer to undoubted technological advances over the past few centuries, but it’s not too late for me to beg that we slow down a little bit and think before adding even more numbers to the list.

Industry 5.0 Describes Important Details Of Implementation, Not Another Revolution

SAP describes Industry 5.0 as human-centric, sustainable, and resilient. According to the European Commission, it “complements the existing Industry 4.0 approach by specifically putting research and innovation at the service of the transition to a sustainable, human-centric and resilient European industry.” Others make broadly similar claims. Few are going to argue against making resource-hungry manufacturing industries more sustainable. No one who lived through the past few years can seriously argue that going back to cost-optimised and brittle supply chains is a better idea than continuing to develop resilient supply networks. Good Industry 4.0 projects were always human-centric, placing the needs of the worker front and centre as they balanced the automation triangle.

There are plenty of Industry 4.0 projects that imposed robots or AI on a human workforce without properly considering the implications. There are plenty of Industry 4.0 projects that were profligate with finite resources or so brittlely designed that they collapsed in the face of external pressures. Those projects weren’t bad because Industry 4.0 is bad. They were just bad projects. They deserved to fail, and they did. There’s nothing about Industry 4.0’s approach to people, planet, or process that requires a revolution to put right.

Industry 5.0, as currently defined, makes no sense and brings no value. It’s a marketing gimmick from people and organisations that should know better. It devalues every single “revolution” that preceded it, and does a disservice to all the companies doing Industry 4.0 carefully, thoughtfully, and well. Let’s agree to stop using the Industry 5.0 term and save it for something truly transformative: clean, sustainable, autonomous, safe, nonpolluting, and affordable mass manufacturing in orbit, maybe? Then we can get back to sharing today’s good practice, to ensure that every Industry 4.0 initiative is “sustainable, human-centric, and resilient.” No number inflation required!

Kim Herrington 3 days ago
Companies want to be insights-driven, customer obsessed, and future fit. This journey includes investing in data literacy or spending on tech. In 2022, 75% of US business decision-makers responded that they are adopting enterprise-wide data literacy, and companies are projected to spend 4.7 trillion dollars on technology globally. But if tech execs think that these […]
Read More
Blog

Tracy Woo 3 days ago
This blog piggybacks off of my last post regarding the management evaluations I’ve been working on in 2022. As previously noted, they take a lot of effort but deliver high value — a lot of which can’t be captured in a single report. I already shared my tidbits of advice for the cost management evaluation. […]
Read More