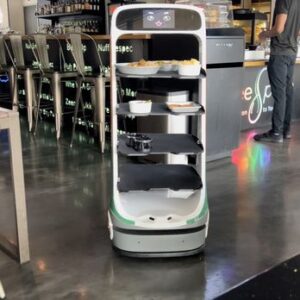 I haven’t (yet) eaten her culinary delights, but Raymone Williams gave me a bit of her time to talk robots. She is the owner of the Tastee Spoon, a Caribbean (Jamaican) restaurant and food truck serving up original cuisine in Atlanta. If you’re busy and want to skip the rest of the blog, here’s the point: If a single-location, independently owned restaurant like Raymone’s can afford a robot restaurant worker and make it work effectively, then almost any business can.

Robots in restaurants will increase and may be good for service workers — and not just for the big, scaled chains but for small stores such as Raymone’s. They will help with the long-term frontline service worker shortage, and we need them to. I’ll let Raymone tell her story:

The robot thing started out as a joke. I was at home and got yet another text from one of the staff saying they weren’t coming in. I just said, “Damn! I wish I had a robot.” And then I thought “Why not!” and got to work on Google and found Richtech Robotics. I said, “Don’t send me any BS … just a link where the robot is being used, not just as a novelty.”

I checked it out and saw them in some seriously fancy Vegas joints. I told them (*laugh*), “You don’t get dressed up to come to my place.” So I bought one, and a month later, it was in the restaurant, almost. The kitchen staff and the front-store people were in an uproar, worried about their jobs. So for a while, I just hid it in my office.

I decided the robot might get sprayed with hot cooking oil if it went back to the kitchen, so we had it go to the server’s window, grab a meal, and deliver it to a table. Wait staff can walk two or three miles a day but not ours, not with “Irie Milly” around. No more going back and forth to the window to see if something is ready to be served. But here’s the surprise: The wait staff makes more in tips. They cover more tables and spend more time getting to know the customer.

Irie Milly hands customers water and greets them at the door with “waa gwaan,” a Jamaican greeting. He plays the “One Love” Bob Marley tune and strolls through the restaurant and, when blocked by someone, will say, “Hey, don’t get too fascinated with me — I’m just trying to do my job!” or “Are you trying to get me fired?!?”

It’s become a thing. We have customers coming from all over and now operate with less staff. An autistic child comes to the Tastee Spoon to see Irie once a week. Others are upset when the robot doesn’t bring them something or when they have to leave with no chance for a hug.

For me, it’s a quality-of-life issue more than the cost savings. A bad employee creates stress and constant worry, and you’re always letting someone go or hiring someone. It is the worst part of running a restaurant. But Irie is there at 10:29 every day.

Restaurants and bars need millions of service workers over the next 10 years, but many are simply a robot’s worst nightmare. They would have to navigate all sorts of random and unpredictable confusion, such as tables rearranged, spills, odd gatherings of customers, and inebriated patrons. But Raymone’s story gives us pause and hope. It can work. Look for the Forrester series on automation for service workers coming soon. First up will be robots for security: Think malls, office buildings, and construction sites — yeah, think “RoboCop!”

It’s More Than A Forum. It’s A Tech Insights Feast.

Come to Technology & Innovation North America, Sept. 29–30, for 35+ analyst sessions on what’s new and next in tech.

Martha Bennett 4 days ago
Learn how the future viability of the metaverse depends on these four key emerging technologies.
Read More
Blog