Skip to content
< Blogs
Home > Featured Blogs > DSGI Know How. Do you?

I’m intrigued by the recent launch of KnowHow.com.

I’ve known it was coming for a while, but now that it’s here it’s not quite what I expected. However in a way it’s actually a lot better.

KnowHow.com is, for want of a better description, the customer service portal for the DSGI chain of consumer electronics stores in the UK:  Dixons.co.uk, Currys, and PC World. These stores operate in a fiercely competitive but large and lucrative market in the UK and extend their reach into Europe through sister company Pixmania.  In recent years wallet share in the CE sector has been moving increasingly online, with brick-and-mortar stores facing the challenge of competing on price with their leaner, lower-cost online rivals. But despite this off-to-online swing, the group is reporting that Internet sales are down.

I was expecting KnowHow to be its revamped eCommerce operation, its response to lackluster digital sales. But interestingly it has done something different. It appears to be trying to step out of the race to the bottom from a price perspective and is positioning itself to begin to compete on a new axis. Service. An interesting play in what could be considered a commodity market.

However, when you learn that its multichannel sales are up 12%, this may not be such a strange move.

DSGI seems to have realized that customers don’t separate their channel preference as rigidly as retailers do. They take a twisty turny path from consideration around the sales loop to ongoing loyalty, leaping from one touchpoint to the next as they do so.  Consumer electronics has always been a sector where a deep level of advice and guidance is required, from pre-purchase through to installation, troubleshooting, and ongoing maintenance. Where KnowHow is now playing is in trying to move that advice and guidance out of the store (delivered by some uninformed Saturday help that reads product specs off the card pinned in front of the TV you are interested in) and onto the Web where it can provide scale, consistency, and timely, personalized interactions. 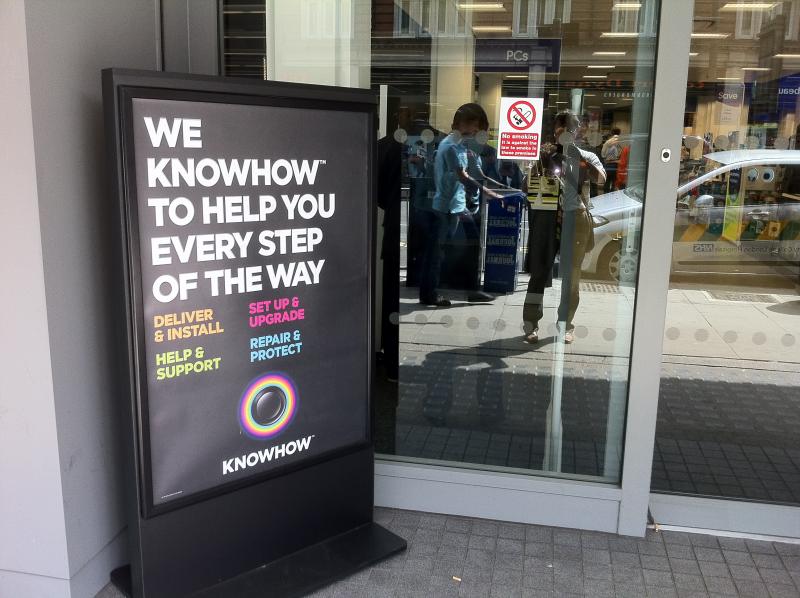 It is even monetizing this by providing subscription-based services like “Store and Backup Online,” adding a little more value than the traditional extended warranty.

This is a model with some potential — embracing the hyper-connected customer, providing value-add services wrapped around a solid in-store product offering, and understanding that in this coming age of agile commerce; customers don’t take a linear path anymore.