Recently I bought myself a tablet, a Samsung Galaxy Tab 8.9 to be precise, and since I brought it home my three children regularly “borrow” it to play games. Games like Bunny Shooter, Shoot the Apple, and World of Goo are among their favorites. But when possible (and allowed), they prefer playing games on the PC. Second choice is the Nintendo Wii, at the moment they mainly play Skylanders and Just Dance. The only game device that hasn't been touched for a while now is the Nintendo DS.

Although uptake of tablets is growing in Europe, the installed base is still much lower than for PCs, Wii, PlayStation, or Xbox. Forrester's Technographics® data shows that about one-third of European online adults use a PC to play games or own an Xbox 360, a Sony PlayStation3, or a Nintendo Wii. 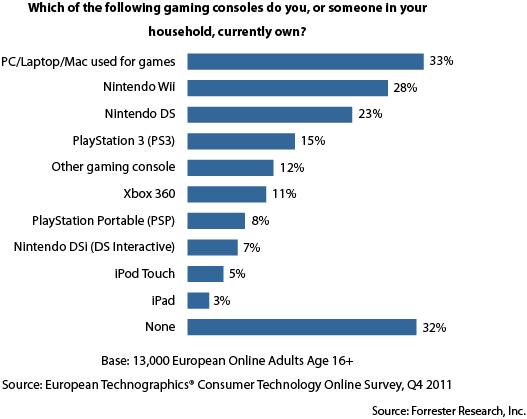 The funny thing is that I see happening in my own family now what my colleague Sarah Rotman Epps mentions in a report from June 2011 "The Products That Lose When Tablets Win". She states that tablets will displace portable game players but not consoles, PCs, or phones. Portable game players are vulnerable to tablets because they fulfill largely the same casual gaming scenario, whereas game consoles and PCs have more complex games that are not substitutable on a tablet.

I’m curious to know: Have you seen the same pattern in your family?

Sharyn Leaver 1 day ago
We made bold predictions for 2022. We weighed in on edge computing, CX, B2B marketing, cybersecurity, and more. Discover which predictions came true and which ones missed the mark as we prepare for Predictions 2023.
Read More
Blog

Kim Herrington 6 days ago
Get seven actionable tips on how to improve your data storytelling in this preview of the upcoming Data Strategy & Insights event.
Read More