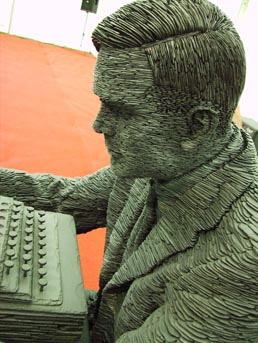 Before the clouds, webs, and distributed networks people had to create their own spaghetti of logic inside a single building using machinery that looked like props from Doctor Who. Spurred by the need to crack the ‘Enigma’ naval communication codes during the Second World War Alan Turing developed an electromechanical device called the Bombe which played a major part in defusing the war. 2012 is the 100 year anniversary of the birth of Turing and he is rightly considered to be the father of computer science and Artificial Intelligence. Turing had both a wonderful and terrible time of it and his life story is well worth a wiki.

The British genius didn’t just advance computer science using valves and wires. He is almost as famous for his thought experiments concerning how we may build machines and computers that can engage in intelligent discourse with humans. Could machine responses fool us into thinking that they were sourced from a human? To answer this question Turing developed a methodology to test the validity of the machine generated responses, fans of Science Fiction are likely to recognize this as the inspiration behind the ‘Voight-Kampff’ test administered by Deckard in Ridley Scott’s ‘Blade Runner.’

Importantly Turing’s test wasn’t about whether machines could think like humans – but “are there imaginable digital computers which would do well in the imitation game?”.  This is the best way to frame the test because it ultimately reveals a focus on usefulness and deftly avoids the circular discussion of “what is human intelligence?”

Decoding another culture’s cipher (cloaked or otherwise) is of course a perfect metaphor for the job of a marketer and Turing, as one of the founding fathers of human/machine interaction is now a figurehead for marketing as it moves into smarter interactions with individuals. Marketing is expanding its view from broadcasting to the 'relatively unknown many' to a discussion with the individual. With the many you need to use TV, radio, display, megaphones or cupped hands at the very least. It’s necessary but the time spent shouting in Hyde Park on Speakers Corner must be counterbalanced with working on immediate intimacy and personalization for the indvidual.

The path to smarter interactions must cross the swamp of the privacy debate first and at present we are moving to Privacy 2.0, where the idea of transparency with consumers is becoming an important litmus test of relationship health. Transparency ultimately means being able to provide a rationale when asked – to be open to inquisition. Why did you show me that video? How come you knew I was in Berlin? Why do you think I like bananas but not banana flavored foods?  Consumers need to be convinced of you, you need to be honest and able to explain why you should remain whispering in their ear from your position at their e-shoulder.

Marketing must always play the role of assurance, encouragement, thrill seeking and experimentation. Marketing is that lothario called Sergio at the bar with great stories, marketing is Bob the funny mechanic that knows the right oil for your car and has friends that do solar panels, Marketing is that Sci-Fi avatar called Oberon in your gaming clan recommending the Avengers outtakes website, it’s Marjorie the 40 year old woman in the chemist that’s looking after you and your family’s health (and has relatives in the street next to you), it’s your drinking buddy, it’s the taxi driver in a town you have never been to before and it’s your stand-in drummer for the night.

… but the problem with Sergio, Marjorie, Oberon and Bob is that consumers want a personal touch and we can’t scale to millions of insightful and intimate conversations using flesh and bone alone. There is a bright horizon however, and one hundred years later we do have agents, systems and computers that can imitate facets of intelligent communication. A toolbelt of sound and vision analytics, social text mining and location modelling are all maturing at a rapid rate and being used for commercial gain today. The question is not when will computers be as smart as humans but are they smart enough now to engage with consumers on our behalf.

I’ve been looking into the state of the nation and what it takes to bring Intelligent Marketing Agents into being and will talk more about it at Forrester’s Interactive Marketing Summit on May 23rd.

I'd love to get your views on the topic.

Stephanie Liu 22 hours ago
The privacy landscape is shifting quickly. It’s a critical time for B2C marketers to get involved in their organizations’ privacy programs.
Read More
Blog

Jeff Pollard 2 days ago
Plenty of people had fun with ChatGPT when it released, but I’m not sure any industry had more fun than cybersecurity. When first released, it turned out that ChatGPT could write code, convert code from one programming language to another, and write malware. Sure, the coherent nonsense problem persisted, but overall, it produced solid stuff. […]
Read More