Intel has made no secret of its development of the Xeon D, an SOC product designed to take Xeon processing close to power levels and product niches currently occupied by its lower-power and lower performance Atom line, and where emerging competition from ARM is more viable.

The new Xeon D-1500 is clear evidence that Intel “gets it” as far as platforms for hyperscale computing and other throughput per Watt and density-sensitive workloads, both in the enterprise and in the cloud are concerned. The D1500 breaks new ground in several areas:

It is the first Xeon SOC, combining 4 or 8 Xeon cores with embedded I/O including SATA, PCIe and multiple 10 nd 1 Gb Ethernet ports. 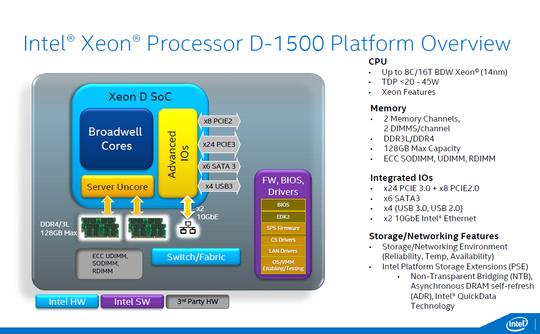 It is the first of Intel’s 14 nm server chips expected to be introduced this year. This expected process shrink will also deliver a further performance and performance per Watt across the entire line of entry through mid-range server parts this year.

Why is this significant?

With the D-1500, Intel effectively draws a very deep line in the sand for emerging ARM technology as well as for AMD. The D1500, with 20W – 45W power, delivers the lower end of Xeon performance at power and density levels previously associated with Atom, and close enough to what is expected from the newer generation of higher performance ARM chips to once again call into question the viability of ARM on a pure performance and efficiency basis. While ARM implementations with embedded accelerators such as DSPs may still be attractive in selected workloads, the availability of a mainstream x86 option at these power levels may blunt the pace of ARM design wins both for general-purpose servers as well as embedded designs, notably for storage systems.

It also servers to remind us that process technology matters, and Intel has once again, by delivering commercial 14nm server parts, proven that it is still the manufacturing standard by which all other semiconductor vendors must measure themselves against.

While a substantial fraction of the 50 design wins Intel referenced in the announcement are going to be embedded in storage and network devices, I expect a variety of small form-factor and ultra-dense servers (my definition of ultra-dense is anything over server per RU) to be available for workloads where a lot of smaller servers make sense, such as web servers, lightweight app servers, content caching, media processing, possibly VDI, etc. An example is a new system announced by SuperMicro which delivers 56 Xeon D-1500 servers in a 6U enclosure. Where the small memory and storage configuration matches the workload (and remember, with multiple 10Gb Ethernet, these small servers can access network-attached storage quite efficiently), this is impressive density, rivaling HP’s Moonshot with higher performance servers. And Moonshot will almost certainly eventually get a D-1500 cartridge, since it seems to fit well into the thermal and mechanical envelope available for a Moonshot cartridge. The only reason for HP not to do this would be to keep Moonshot from cannibalizing other higher-end product lines, and I hope that the days of this kind of thinking are dead and buried – neither HP nor any other Tier-1 vendor can afford to leave a potential niche unaddressed as long as there are any viable competitors on the horizon.

In a nutshell, more choices for cost-effective scaling of compute resources for our ever-growing infrastructures as we try to keep up with the flood of mobile and other data that stream into our applications.