In chaos theory, the butterfly effect posits that seemingly small changes at one moment in time can result in large, dramatic changes at another. The subtle flap of a butterfly’s wing can trigger a violent hurricane that occurs miles away or days later. Rationally, the idea may seem like a stretch, but in a digital sense, we are witnesses to – and victims of – the butterfly effect every day through social media. A few individuals’ posts online can escalate into a chorus of voices that mobilizes communities and creates new standards. We saw this last year after a homeless man in Boston turned in a backpack and, more recently, when Cecil the lion was killed in Zimbabwe.

Social media has always been a catalyst for bringing people together as well as an outlet where consumers can vent. But when a surge of voices results in change, social media posts are more than ephemeral cybertext. And, according to Forrester’s Consumer Technographics® data, consumers around the world leverage social media to generate buzz about current events, although members of some countries are more vocal than others: 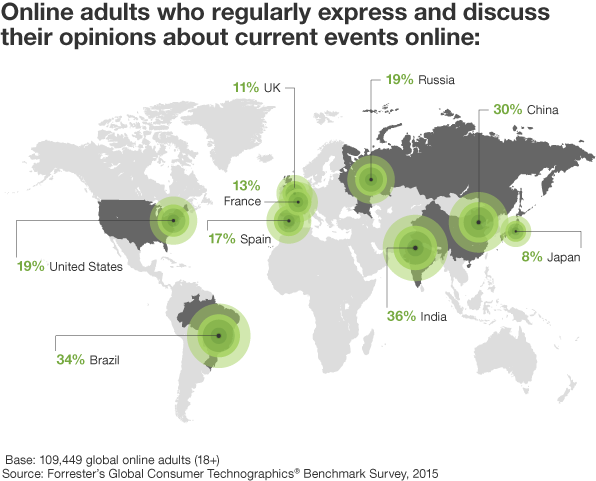 With the right mentality, skill set, and tool box, organizations can extract value from the chaos and channel social conversation into innovation. For example, through a partnership with Twitter, the city authorities in Jakarta, Indonesia mine social media data so that they can respond to environmental disasters faster.

In their recent report, my colleagues Rick Parrish and Jennifer Belissant stress the importance of harnessing social media voices to respond more swiftly to – and possibly anticipate – citizen demands. They note the pressure for government agencies especially, which otherwise “jeopardize their stability and economic prosperity as people, companies, and other investors vote with their feet.” Rick and Jennifer show that “governments at all levels around the world must embrace . . . customer-centric imperatives” to give citizens what they really need and to stay current in an ever-evolving environment.