The press continues to highlight bankruptcies and store closings to support a theory that the entire retail market is in a death spiral.  However, neither bankruptcies nor store closings accurately reflect the state of the retail market.  In 2017 we see an actual Wikipedia page dedicated to the ‘retail apocalypse’.  Headlines span the past seven years touting the doom of retail: 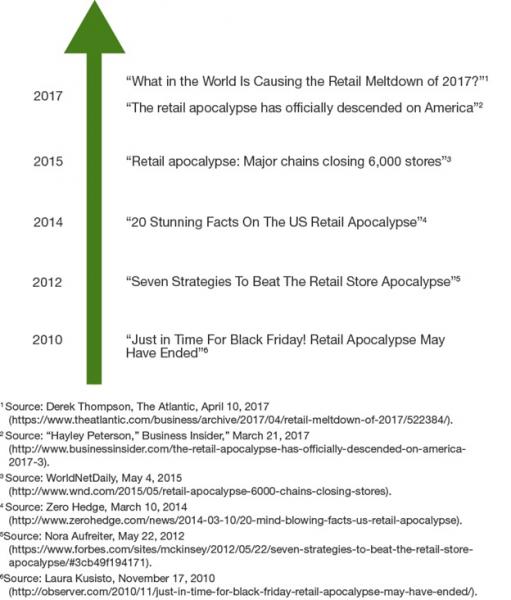 Retail bankruptcies numbered 20 in 2008, and this year they are tracking higher, but you can still count them on two hands.[1]  The ten confirmed bankruptcies in 2017 included the well-known retailer Payless ShoeSource.[2] But these bankruptcies only show how specific companies have been challenged and are not indicative of the overall 3.3% growth in the retail market.[3]  For starters, as of early May 2017, none of the top 100 retailers in the US went bankrupt.[4]  Keep in mind, Chapter 11 is not liquidation, companies can recover, such as Ashley Stewart who recovered from a second bankruptcy in 2014.[5]  Chapter 11 offers second (or third and fourth) chances to restructure, forgive debts and rebuild an organization.

…and Neither Are Store Closings

Retailers open and close stores all the time.  They need to manage to changes in the market, geography, new store configurations, acquisition redundancies, lower leases, online buying trends and poor store performance.  The US market is bursting with stores, for instance, in 2014, the top 100 US retailers alone accounted for 180,777 retail stores.[6] To date in 2017, 2,880 stores have closed through the end of March – or less than 1.6% of that total.[7] Even In 2008, at the depth of the recession, all of 6,163 retail stores shuttered their doors.[8] Keep in mind that retailers are opening stores as well.[9]  For example, Target announced it is launching hundreds of small format stores beginning in 2017.[10] Dollar General is planning to open 1000 stores in 2017.[11]

So, what are Target and Dollar General doing that provides impetus for growth?  The best retailers will adapt their business teams to grow their business and cope with market changes.  With an online market growing at 4x the offline rate, (but much smaller in absolute terms), new technologies such as AI capturing customer interest, and changes in customer habits, the need for retailers to adapt becomes apparent.[12]

So instead of worrying about the four horsemen of a retail apocalypse, smart digital retail leaders should focus on adapting to change through four facets of business:  alignment, resource provisioning, operating speed, and customer experience.  Together, these are the four facets of the digital retail adaptability flywheel.  Proactively targeting and tackling these aspects of adaptability can help your digital teams evolve through a virtuous, continually improving path.

[1] At the end of March 2017, there were nine recorded bankruptcies in the retail sector from notable retailers.  Source: Krystina Gustafson, “Retail bankruptcies march toward post-recession high,” CNBC.com, March 31, 2017 (http://www.cnbc.com/2017/03/31/retail-bankruptcies-march-toward-post-recession-high.html).

Learn more about retailers’ new technology initiatives for 2017 in the Forrester report “The State Of Retailing Online 2017: Key Metrics, Business Objectives, And Mobile.”

Meng Liu 4 hours ago
Accounts receivable (AR), including invoice issuing and payment processing, is one of the core processes in a company’s financial operations. The rising adoption of e-invoices has spurred more firms to acquire AR automation software to support customer demand and respond to digital transformation. My recently published report, The AR Invoice Automation Landscape, Q1 2023, will […]
Read More
Blog

Nikhil Lai 4 days ago
The question I’m asked most often is “Is retail media overhyped, or is it the next big thing?” This question comes, in part, from media coverage and forecasts, including Forrester’s, that project a significant share of ad spend — nearly $100 billion, according to Boston Consulting Group — being absorbed by retail media networks (RMNs) […]
Read More