As analysts, part of our job is to try to decipher the broader trends impacting businesses. Needless to say, the exercise is becoming more and more difficult, and anything beyond 24 to 60 months looks very futuristic. That’s why I enjoy reading prospective books and especially publications from the National Intelligence Council. Published every four years since 1997, Global Trends assesses the key trends and uncertainties that will shape the strategic environment for the United States during the next two decades. I strongly recommend you read the latest version published: Global Trends: A More Contested World.

This report confirms some of the early trends we identified at the beginning of the year in the report, Geopolitical Disruption Demands Local Trust.

The report goes on to analyse emerging dynamics, within societies, at the state level, and in the international system. These structural forces, along with other factors, will intersect and interact at the levels of societies, states, and the international system, creating opportunities as well as challenges for communities, institutions, corporations, and governments. These interactions are also likely to produce greater contestation at all levels than has been seen since the end of the Cold War, reflecting differing ideologies as well as contrasting views on the most effective way to organize society and tackle emerging challenges.

Finally, the third section of the report identifies several key uncertainties and uses these to create five future scenarios for the world in 2040:

The fifth scenario is the most interesting one, since it’s the most disruptive. Here, a global coalition, led by the EU and China working with nongovernmental organizations and revitalized multilateral institutions, is implementing far-reaching changes designed to address climate change, resource depletion, and poverty following a global food catastrophe caused by climate events and environmental degradation.

These scenarios are not intended to be predictions but to widen the aperture as to the possibilities, exploring various combinations of how the structural forces, emerging dynamics, and key uncertainties could play out.

Definitely some good food for thought. Check out our take on what this could mean in the short term for CMOs in our recent report, Geopolitical Disruption Demands Local Trust. 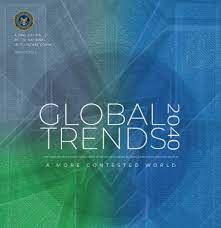